Getty Michael Misick and Omarosa Manigault-Newman reportedly had an affair in 2005, while Misick was the Prime Minister of Turks & Caicos.

Omarosa Manigault-Newman was reportedly having an affair with former Prime Minister of Turks and Caicos, Michael Misick, in an exclusive report by DailyMail.

The affair allegedly occurred for six months in 2005, when Misick was in charge of a famous celebrity-beloved resort.

Misick was fired in 2009 after the British government accused him of bribery, fraud and corruption. Here’s what you need to know.

1. Misick and Manigault-Newman Reportedly Met in 2005, When She Was Newly Divorced

Rare TV Interview with Turks and Caicos Former Premier #MichaelMisickIn our exclusive interview with former premier of Turks and Caicos Michael Misick he details his push for independence from the British and his corruption trial. He’s asked about allegations that he sold crown land for a song and took kickbacks from developers. Take a look! Join the discussion. Leave your comments.2016-01-08T23:36:26.000Z

According to DailyMail, Manigault-Newman and Misick met at a charity function in New York in the latter half of 2005, immediately following her divorce. Misick was reportedly very taken by Manigault-Newman, and flew to New York several times to take her to dinner.

Misick was also reportedly taken by Manigault-Newman’s ability to “manipulate” the people around her, a source told DailyMail. The source also explains that he knew she had proximity to Donald Trump as a result of “The Apprentice,” and that she might be able to help boost his image in the United States.

2. Misick Was the Reason for the British Government’s Decision to End ‘Self-Rule’ in Turks & Caicos

In 2009, Misick was ousted from his position as Prime Minister of Turks and Caicos, one of Britain’s five remaining territories in the Caribbean, after it was revealed that he had stolen over $16 million from public coffers.

Upon ousting Misick, the British government re-instated direct rule over the chain of 40 islands. Misick was eventually put on trial, despite having attempted to flee to Brazil. The trial is still ongoing, three years later.

According to DailyMail, Manigault-Newman visited Misick’s lavish oceanfront property several times for the duration of their relationship, even bringing her mother on a trip.

The DailyMail source said, “As well as an obvious physical attraction, there was an intellectual aspect to their relationship…He described her to friends as an intelligent, spirited, aggressive and single-minded black woman.”

Manigault-Newman and Misick’s alleged affair is said to have ended in in 2006, when Misick began dating actress and model LisaRaye McCoy, whom he eventually married. They have since divorced.

Of their alleged affair, Misick said in an email to DailyMail, “I have not seen Omarosa for a number of years and it is not in my nature to comment on previous relationships.”

Lisa Raye wedding video invitationI was hired a couple years ago to put together this video wedding invitation for Lisa and Michael. They loved it. Even though there were some bumps along the way with them, I'm sure they'll work it out and i wish the nothing but the best. http://rossography.homestead.com/2009-07-01T01:56:12.000Z

According to DailyMail, Misick’s trial, which is still ongoing after three years, is costing the country of Turks and Caicos up to $1 million a month.

Misick has been accused by British officials of massive corruption, and of ushering into the country “a palpable climate of fear,” per Daily Mail. One of the main points of contention at the trial is how Misick, who entered office with a net worth of $500,000, could end up affording a lavish lifestyle which included in $8 million mansion, among other things.

Misick has maintained his innocence throughout the trial, establishing that he is the victim of a “political witch hunt” by the British government.

In 2016, Misick ran as an independent candidate in the general election for Turks and Caicos, but he wasn’t able to revive his political career, and ended up snagging less than six percent of the vote. 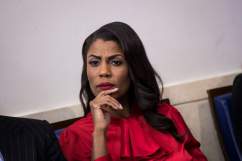 LISTEN: Omarosa’s Lara Trump Tape, “An Attempt to Censor Me”

Read More
5 Fast Facts
Michael Misick and Omarosa Manigault-Newman reportedly had an affair in 2005, while Misick was the Prime Minister of Turks & Caicos.