A brawl at a Brooklyn nail salon caught on video has led to multiple arrests and protests calling for the salon to shut down. A video showing the Friday night incident was posted to Facebook by a customer who watched the melee at New Red Apple Nail in East Flatbush. The video, which you can watch above, shows employees of the nail salon attacking a customer with a broom and throwing liquid at her while she tries to fight them off.

Mercy Maduka, who posted the video, wrote on Facebook that the fight began when the customer refused to pay for a botched eyebrow job. Police arrested the customer and one worker after the brawl, according to the New York Post. Huiyue Zheng, 32, was charged with assault and weapon possession, the Post reports. She was released on her own recognizance after a hearing at Brooklyn Criminal Court, according to the Post. Christina Thomas, the 35-year-old customer, was charged with misdemeanor assault and also released on her own recognizance, the Post reports.

Surveillance video showed the brawl from another angle:

Witnesses told PIX 11 that Thomas was attacked with brooms, dust pans and a liquid, allegedly acetone, the main ingredient in nail polish remover. Police have not confirmed those details.

On Monday, protesters gathered outside of the nail salon, New Red Apple Nail, at 1426 Nostrand Avenue in Brooklyn, calling for the business to be shut down, according to PIX 11. The protesters were holding signs that read “Black $$$ Matters” and were chanting “black dollars matter,” the news station reports.

“So because she did not want to pay the $5 for her messed-up eyebrows, they attacked this grandmother and her two granddaughters with sticks, threw acetone on them and then called the police on them,” activist Jasmine Johnson told PIX 11. Maduka, who originally posted the video, wrote on Facebook, “Share this cause the cops decided to arrest the black people but not the Chinese people who ganged up on them.” Maduka also wrote that the employees were, “hitting them like animals.”

Police said Zhing was taken to the hospital before being arrested because of visible injuries to her face and body, PIX 11 reports. Thomas refused medical treatment, according to police.

“We don’t need to protest, we need to financially castrate this business. They cannot survive and we cannot feed them,” Johnson said at the protest, according to a Facebook video.

The Facebook and Yelp pages for New Red Apple Nail have been flooded with angry comments.

“This place will never get my money. The nail salon is gross and filthy. The service is below standards and they lack respect for people of color. The worst nail salon ever! I would give them a -1 if I could,” Jude Watson wrote.

Shamile Smiley McBroom added, “Video of a grandmother and patrons being hit with brooms does not deserve service. Only recommendation I have is to close it!”

Jo Khan wrote, “Completely unprofessional and in poor taste. Do not waste your money here. They are violent. I saw these workers beat up a woman, well more like jumped her.”

Empress Ak wrote on Facebook, “I am standing with the elder who was thrown acetone in her face while her granddaughter was attacked. The young lady paid for her feet/nails but refused to pay for her eyebrows because she was unsatisfied. Instead of making a compromise or including a 3rd party (police) to mediate they attacked them. We need to start supporting our own & run them out of our communities!”

Scene outside the New Red Apple Nail Salon on 1426 #Nostrand Avenue. Community calling for additional arrests, and a new chant—“no nails no toes” after employees got into a physical argument with customers over a five dollar eyebrow wax. pic.twitter.com/7t2qsY5LYZ

About 100 protesters were outside of the nail salon on Monday, NBC New York reports. 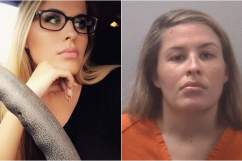 Loading more stories
wpDiscuz
0
0
Would love your thoughts, please comment.x
()
x
| Reply
A viral video shows employees at a Brooklyn nail salon, New Red Apple, attacking a customer with a broom and liquid after the woman refused to pay for a botched eyebrow wax.