Getty Phil Bredesen is running as the Democratic candidate for the open Senate seat for Tennessee, against Republican Rep. Marsha Blackburn.

Former Governor Phil Bredesen is the Democratic nominee for the U.S. Senate race in Tennessee. In what has been described by CNN as the most “hotly contested” Senate seat race of the 2018 midterms, Bredesen will face off against Republican Rep. Marsha Blackburn.

Bredeson won the Democratic party with approximately 95% of the vote. What’s more, in a leaked audiotape of what was allegedly a private campaign event for Blackburn, Trump reportedly said Bredesen was a “tough” opponent.

1. He’s Running as an ‘Independent Thinker’ Who Will Work With Trump When His Ideas ‘Make Sense for Tennessee’

According to The Washington Post, Bredesen is running his campaign as a self-proclaimed ‘independent thinker,’ promising constituents that he will work with Trump when it makes sense for Tennessee and stand up to Trump when it doesn’t.

In comparison, Bredeson’s opponent, Blackburn, has established herself as a serious Trump supporter, describing her values as a “hardcore, card-carrying Tennessee conservative.”

In his campaign video, Bredesen says, “We all know Washington is broken...I’m running for the Senate because I have the right kind of experience and the actual track record that it will take to start working across party lines to fix the mess in Washington and bring common sense back to our government.”

2. He Has Served as the Governor of Tennessee Since 2003

Bredesen served as the Governor of Tennessee from 2003 to 2010, becoming the first Governor in Tennessee history to win all 95 counties in his 2006 election. During his time as Governor, he reportedly balanced eight consecutive state budgets, and also “championed education reforms that made Tennessee the fastest-improving state in the history of the Nation’s Report Card.”

Since leaving the Governor’s office in 2010, Bredesen has served as the chair of a firm that develops solar stations. In December, 2017, Bredesen announced that he was going to run for Bob Corker’s open seat in the Senate. After his announcement, Cook Political Report changed the likelihood of the election outcome from a “likely Republican” victory to a “toss up.”

Jennifer Duffy of Cook Political Report wrote, “For Republicans, this seat which seemed like a very safe bet at the start of the cycle is now one of its most vulnerable.”

3. He Also Served as the Mayor of Nashville, & Helped the City Become ‘One of the Best Places to Live in America’

Prior to becoming Governor, Bredesen served as the Mayor of Nashville from 1991 to 1999. During this time, Bredesen helped mold the city into what it would eventually become: one of the best places to live, according to his site.

Prior to becoming Mayor, Bredesen worked in the health care industry, creating his own health care management company which would eventually grow to over 6,000 employees.

4. Bredesen Has Most Notably Separated Himself From Trump on the Matter of Tariffs, Claiming They Threaten $1.4 Billion in Tennessee Exports

Bredesen has repeatedly criticized Trump’s tariffs, even creating an ad focused entirely on that topic. In the ad (as seen above), he says,

“I said before that if President Trump proposes something good for Tennessee, I’ll be with him. That’s why I’m fine with his outreach to North Korea. You’ve got to try.”

Bredesen continued, “But if he proposes something that hurts Tennessee, I’ll oppose it. And these new tariffs will hurt us. They hurt our auto industry, our farmers, even Tennessee exports like Jack Daniel’s. In the Senate, I’m going to do what’s right for Tennessee.”

In a recording of Blackburn strategist Ward Baker’s conversation with a room full of Republican activists in early July, Baker said that the Senate race would be won by “death by 10,000 cuts.”

According to The Tennesean, he then allegedly went on to say, “I believe when the TV ads are out, and we lay out our case, I think some of them will come back. And the ones that don’t, I’ll do everything in my power to make sure that they have trouble living in the future.”

Baker continued of their campaign strategy, “I think you’ll see a lot more come out [about Bredesen]…You’re going to see a very good controversy, a very big contrast.” 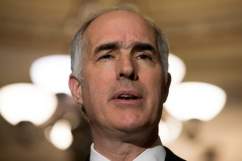 Loading more stories
wpDiscuz
0
0
Would love your thoughts, please comment.x
()
x
| Reply
Phil Bredesen is the former governor of Tennessee, and is currently running against Republican Rep. Marsha Blackburn for the open Senate seat that Bob Corker has vacated.