Google Labeled for Reuse Reports of an active shooter at a Walmart in Cheltenham, PA with swat teams surrounding the building. At least two people were reportedly shot. See photos here.

An active shooter situation was reported at a Walmart in Cheltenham, Pennsylvania Tuesday evening, according to WPVI-TV. Police and first responders were at the scene after reports of shots fired at the store in a strip mall on Cheltenham Avenue near Easton Road around 6 p.m.

Five people were injured during the incident. Police have not yet revealed their conditions, according to NBC10.  At least two victims were shot near the customer service desk, NBC10 reports.

A store manager and cashier were shot in the leg while a customer was shot in the arm, another cashier, Darrell Archer, told the Philadelphia Inquirer. A pregnant woman also fell during the incident, police told Fox 29.

y'all the cheltenham walmart is being held up by an armed gunman
please call your loved ones if they frequent here or live in the area ??‍♀️? pic.twitter.com/QMS5BUh7CC

One person was taken into custody at East Sedgewick and Forrest avenues, just blocks from the Walmart. The shooter apparently escaped from the store — and crashed a getaway car into a police SUV, reports said. A woman was also apprehended.

Arrest made near scene of apparent shooting in Cheltenham Twp., Pa. Still working to confirm connection to Walmart pic.twitter.com/ykNuyvklEo

The incident initially erupted as a disagreement at the register, during which a man took a firearm from a woman and opened fire, police told the outlet, according to Fox 29.

“I ducked down and ran away and tried to get out of there as fast as I could,” co-worker Leenie Davis said. Archer told reporters he heard up to six shots.

“We were petrified and we were trying to be quiet,” Jaynee Davis, who was at the customer service desk at the time, told the newspaper.

SWAT teams were at the scene and were searching the building. Police departments from several nearby municipalities responded to the scene after the shots fired report.

Police responded to the scene and also recovered a vehicle that fit the description of the suspect’s on Forrest Avenue and East Sedgwick Street, NBC reports.

There was an active shooter at Walmart in Cheltenham Twp. Massive police presence. SWAT on scene All traffic is blocked off. No other information available from police at this time pic.twitter.com/870PJ7osXQ

Denise Nakano wrote: Shooting inside a Walmart in Cheltenham ends at Sedgwick and Williams in Philadelphia. Witness: Suspect’s car rams into a parked Police SUV and then two people take-off. Police catch-up to them.”

The suspect tried to kick out the window of the police car while running from police, forcing officers to subdue him with a stun gun, the Inquirer added. Two officers were hospitalized after the crash, according to the paper.

Shooting inside a Walmart in Cheltenham ends at Sedgwick and Williams in Philadelphia. Witness: Suspect’s car rams into a parked Police SUV and then two people take-off. Police catch-up to them. @NBCPhiladelphia pic.twitter.com/B0067jhjEl

Fox29 is airing a live Facebook feed from its chopper. You can check it out below:

Cheltenham is a township of about 37,000 residents located in Montgomery County, Pennsylvania, about 15 miles outside of Philadelphia.

This is a developing story. Heavy will continue to update as more information is known. Check back for updates. 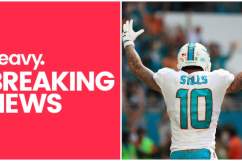