The family of Richard Russell, the airport ground services worker who stole a plane from Sea-Tac International Airport and crashed it after a dramatic flight, has released a statement praising his compassion and expressing “complete shock” over what happened.

Russell, who dreamed of being in the military and once ran a bakery with his wife, was identified as the suicidal worker who stole the airplane and took it on a dramatic unauthorized flight, where it was chased by fighter planes as he attempted “stunts” in the air. The plane crashed, killing Rich Russell.

On social media, Richard Russell used the name “Beebo Russell,” and that was the name that his family used in the statement. (If you need help, you can call the National Suicide Prevention Lifeline at 1-800-273-8255.)

Here is a statement from the family of Richard Russell, the Horizon Air employee who stole a plane, crashed it into Ketron Island.
“This is a complete shock to us. We are devastated by these events and Jesus is truly the only one holding this family together right now.” pic.twitter.com/5z4BYRBrcU

Russell’s family released a statement to the news media expressing great shock and remembering Russell for his compassion. In addition to other family members, Russell leaves behind a wife named Hannah Russell.

“On behalf of the family, we are stunned and heartbroken. It may seem difficult for those watching at home to believe, but Beebo was a warm, compassionate man,” the statement read. “It is impossible to encompass who he was in a press release. He was a faithful husband, a loving son, and a good friend. A childhood friend remarked that Beebo was loved by everyone because he was kind and gentle to each person he met. This is a complete shock to us. We are devastated by these events and Jesus is truly the only one holding this family together right now. Without Him we would be hopeless. As the voice recordings show, Beebo’s intent was not to harm anyone and he was right in saying that there are so many people who love him.”

The family thanked authorities, Alaskair, the community and Russell’s friends and family. They said the family “is moving forward with the difficult talk of processing our grief” and asked for space to mourn. The statement was signed the “Family of Beebo Russell.”

A neighbor in the Seattle area described Russell’s family to The Seattle Times “as the closest, most stable she’s ever known.”

Russell mentioned his family in a video he had posted to YouTube that also discussed his job and travels.

Authorities said Russell was suicidal. “Male is confirmed a suicidal male. Acted alone he is 29 year old Pierce county residence. We are working back ground on him now,” the Pierce County Sheriff wrote. “This is not a terrorist incident. Confirmed info .. this is a single suicide male. We know who he is. No others involved.”

Richard Russell, Who Spent Time in Alaska, Was Religious & Told Air Traffic Controllers He Was ‘Broken’

On Facebook, Rich, using the name Beebo Russell, wrote that he lived in Sumner, Washington, was from Wasilla, Alaska, and was married to Hannah Russell, who works as an assistant pastry chef and waitress, according to her social media account.

Richard Russell had a website that appears to have been for a college communications class.

“Hey all! My names Richard Russell, I’m 27 and currently living in Sumner, WA with my incredible wife Hannah. I was born in Key West, Florida, and moved to Wasilla, Alaska when I was 7. I met Hannah in Coos Bay, Oregon in 2010 while we were both going to school,” the about me section says.

A friend wrote on Facebook, “So heart broken…he was such a kind person to me. He would take my shifts if I needed. Never knew he was fighting a battle non of us knew about. He was always smiling.”

A 2012 article in the World described how Russell met his wife. “Hannah and Beebo met at a Campus Crusade for Christ gathering at Southwestern Oregon Community College last year,” the site reported.

“Our first date, he kind of cornered me into it,” Hannah Russell said to the site. “I was dead set against it.” Their business contained a sign that read, “I have loved you with an everlasting love. I will build you up again and you will be rebuilt.” In the article, Russell described himself as laid back and easy going.

On Facebook, his favorite quotes were religious in nature, including, “God IS Love” and “No Guilt in Life, No Fear in Death, this is the Power of Christ in Me,” and a non religious line, “This is America.”

A former coworker, Rick Christenson, told The Seattle Times: “He was a quiet guy. It seemed like he was well liked by the other workers. I feel really bad for Richard and for his family. I hope they can make it through this.” He said that airline employees go through background checks.

Audio captured emotional conversations between the man, named as “Rich,” and air traffic controllers trying to help him land safely. Authorities said they don’t think he had a pilot’s license and aren’t sure how he was able to take off, much less perform complicated tricks in the air like a “barrel roll.” At one point, Russell told a controller he had played a lot of video games.

“Damnit Andrew, people’s lives are at stake here,” Rich said at one point in the audio, which you can listen to later in this article.

“Ah, Rich, don’t say stuff like that,” the controller said.

“I don’t want to hurt no one. I just want you to whisper sweet nothings into my ear,” said Rich, who claimed he could fly the plane because he played video games.

Sea-Tac airport confirmed the plane was down a short time later. “An airline employee conducted an unauthorized takeoff without passengers at Sea-Tac; aircraft has crashed in south Puget Sound. Normal operations at Sea-Tac Airport have resumed,” the airport wrote.

An airline employee conducted an unauthorized takeoff without passengers at Sea-Tac; aircraft has crashed in south Puget Sound. Normal operations at Sea-Tac Airport have resumed.

The audio between the man known as “Rich” and air traffic controllers further captured his demeanor. “I’ve got a lot of people that care about me. I’m going to disappoint them to hear that I did this. I would like to apologize to each and every one of them. Just a broken guy, got a few screws loose I guess. Never really knew it, until now,” Richard Russell said at one point.

You can read more about Richard Russell’s life here: 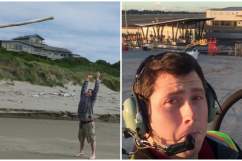 Read More
Breaking News, Seattle
The family of Richard Russell, who took the plane from Sea-Tac airport in Seattle, has released a statement. He is also called Rich and Beebo.