Getty Trump referred to Bernie Sanders at his Pennsylvania rally as "Crazy Bernie."

You can watch video of the moment below:

The Trump rally was held on August 2, 2018 in the critical swing state that helped give Trump his 2016 election victory.

Trump launched into the Bernie Sanders comments after declaring that his campaign slogan “Make America Great Again” was “maybe the greatest slogan ever, right?”

He also said rally-goers’ MAGA hats would be “very valuable someday.” He used a derogatory nickname for Democrat Elizabeth Warren as well as dubbing Bernie Sanders both “Crazy Bernie” and “a crazy dude.”

President Trump then touted the African-American employment rate numbers, saying they had “reached the lowest level in the history of our country. Honestly, think of that number. I honestly think that’s hard for the Democrats to beat….how do you stop that?”

He then launched into his verbal fusillade against the Senator from Vermont, who was vanquished by Hillary Clinton in the Democratic primary but could plausibly mount another challenge in 2020.

“Let’s say I’m running against Pocahontas or Crazy Bernie. I tell you, I’ve gotta hand it to Bernie. I saw him up there the other day,” Trump said.

“That hair is getting whiter and whiter and he’s getting crazier and crazier, and I saw him, ‘We’re stopping Donald Trump. We’re stoppin’ him…’ and I looked at my wife and said, ‘You know you’ve got to hand it to that guy. He doesn’t quit,’ and that’s OK. Crazy Bernie. He’s one crazy dude. So, I don’t know who we’re going run against. I don’t know. But when Bernie tells how wonderful things are, think of it. He wants to raise your taxes, he wants to create massive amounts of crime, he wants to open the borders. Think of it. Just think of it…and I say one thing. African-American, Hispanic, Asian, you have the lowest level of unemployment in the history of our country. How does someone fight that?”

At one point, Trump waved his hands around, mimicking Sanders’ speaking style.

Sanders wasn’t the only politician given a nickname by Trump:

Some people on Twitter weren’t fans of the nicknames, although the crowd seemed to enjoy them. “Trump in Wilkes-Barre rally gives shout-outs to Crooked Hillary, Crazy Bernie, Pocahontas, and Sleepin’ Bob Casey. The crowd roars with laughter. This how you know these MAGA folks are literally immature. No decency!” wrote one critic on Twitter.

Some people liked the references, though:

Here are some of the other reactions on Twitter:

Trump willing to brawl against foes like Left brawls. That triggers #NeverTrumpers.

He also resurrected the “Crooked Hillary” moniker that he gave to Hillary Clinton during the presidential election. Trump didn’t mention Joe Biden, another plausible Democratic contender in 2020, during the moment. Biden recently polled seven points ahead of Trump in a hypothetical match-up for 2020.

You can read about that poll here: 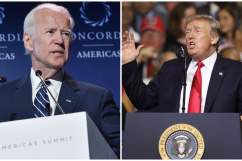