A man at Yellowstone National Park did everything park rangers would normally tell him NOT to do: Get close to a bison, and then taunt the animal.

The video above has quickly gone viral and left viewers wondering what the man could have possibly been thinking. Lindsey Jones shared the video on YouTube.

Traffic had halted to make room for the bison as it made its way across the road. You can hear the bison grunting in the video. For some reason, a man thought it would be a great idea to walk into the center of the road and start aggravating the bison. The animal must not have been very pleased, because it turned and charged!

But the man must have thought this was funny. Instead of backing off, he continued the taunting. The bison charged for a second time, at which point Jones moved her phone and can be heard saying that she couldn’t watch. Thankfully neither human nor animal was hurt, and walked off in separate directions.

Yellowstone National Park is the only area of the United States where wild bison live. According to its website, the park is home to two separate herds. There are between 4,000-5,000 of the animals living at Yellowstone. You can read more about the history of the American bison here.

Male and female bison are referred to as bulls and cows. A bull can weigh up to 2,000 pounds. A cow is about half that size. Their shoulders can reach as high as 6 feet tall.

But don’t assume that their massive size means they move slowly. On the contrary, bison can run as fast as 35 miles per hour. They can also jump over objects up to 5 feet tall and are good swimmers.

The bison mainly eat grass, twigs and shrubs. But they don’t just swallow it and move on. The animals regurgitate their meal and chew it again before eventually digesting it.

GettyAmerican Bison and their calves, forage for food at Yellowstone National Park, Wyoming on June 1, 2011. In the early 1800’s, an estimated 65 million bison roamed throughout the continent of North America but hunting and poaching had a devastating effect on their population and by 1890, fewer than 1,000 remained.

Yellowstone National Park rangers warn the public to stay at least 25 feet away from large animals including bison, bighorn sheep, moose and elk. They caution people to stay inside their vehicles if they spot a bison. The Yellowstone website states:

Each year Yellowstone visitors are gored and some have even been killed by these mighty animals. Stay safe, and stay in your car when viewing them. Yep, that means petting them is off limits, no matter how impressive that picture might look on Facebook.

Don’t approach animals. If it changes its behavior because of your presence, you’re too close. Sure they may seem calm, tame even, but their disposition is toddler-like in that it can change in a second. Always obey instructions given by park staff on the scene. 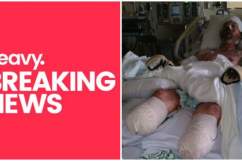