A road rage incident in New Jersey ended after a tractor-trailer driver crashed into a highway median, flipped and overturned across Route 17. Video of the crash was caught on a dashboard camera, according to police.

The driver of the grey SUV seen in the video told police that he saw the tractor-trailer driver aggressively and recklessly changing lanes, according to Mahwah police Chief James Batelli. The SUV driver “decided to take matters into his own hands,” and attempted to slow the truck down to prevent an accident.

“Miraculously, no other vehicles struck the tractor which could have resulted in a major accident since it occurred at approximately 9:46 a.m. on a weekday morning,” said Batelli.

According to Batelli, the SUV pulled into the left lane of the highway in front of the tractor-trailer to try to slow the driver down. However, the SUV eventually pulls back to the right lane and appears to head off of the highway, while the truck overtakes the SUV.

The tractor-trailer can then be seen swerving slightly, eventually slamming into the center median while trying to make a curve, flipping the truck over and sliding across Route 17.

“In this latest incident the proper approach would have been for the driver of the SUV to have dialed 9-1-1 and report the tractor to law enforcement,” the chief said.

Lt. Scott Cherven, Mahwah traffic bureau supervisor, urged motorists not to retaliate against aggressive drivers. “What starts out as a motor vehicle violation can easily escalate in a very dangerous situation with the potential of very serious, if not dangerous outcome,” Cherven said in a statement. 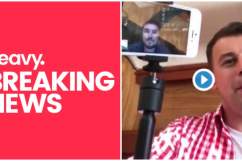 WATCH: Jason Kessler Gets Yelled at by His Dad on Live Video