Inciweb California Fire Near Me

With the Delta Fire exploding in size, fires in California are attracting national attention again. Read on to learn all the details about the current fires in California as of September 6, with a roundup of maps of the larger fires around the state, their containment levels, evacuation details, and where the fires are located.  News is constantly changing, so call your local officials if you are concerned about evacuations near you.

This map below is an interactive map of the more significant fires in California, consistently updated and provided by CAL FIRE and Google. Fires in red are active and fires in black are contained. Read the next section for details about the fires listed on the map. You may need to zoom into this map to see California up close.

The California Governor’s office has another active fire map for comparison, which is embedded below. This map periodically is made available only to those with a login, so if it’s not available when you’re reading this story, it might be released to the public again later. This map includes a major incident summary for the day.

Below is another active fire map from Google’s Crisis Map. Zoom in to see areas of interest. This map also includes fires in other states.

Next are more specific details on the fires for September 6. The details are extensive, so if you are looking for a specific fire, search for the name so you can find it faster, or just scroll down and look at the fires, listed in alphabetical order.

List of Active Fires in California as of September 6

Here are the active fires and updates about them, per CAL FIRE. Most of these are in alphabetical order, but newer fires not yet listed on the CAL FIRE map may be included in a separate section at the end.

The Alhambra Fire is still listed on CAL FIRE’s map although it’s not technically a CAL FIRE incident. On August 17, Contra Costa County Fire’s public information office noted that forward progress of the fire had been stopped at 30 acres. No further updates have been posted since.

The #BootFire is at 4,620 acres and 0% containment. Evacuations and road closures grew as today’s fire behavior was extreme. Structure protection is taking place throughout the night. https://t.co/JUTaFPH0lk pic.twitter.com/8q9k7dGfNu

CAL FIRE is helping Humboldt-Toiyabe National Forest with this fire, which is off Highway 395 and Highway 108 in Sonora Junction (Mono County.) According to Inciweb (https://inciweb.nwcg.gov/incident/6190/), the fire is 4,620 acres and 3 percent contained as of September 6, and the cause is unknown.

The #BootFire kicked up just to the SE of the 395/108 intersection earlier this afternoon in California’s Eastern Sierra. pic.twitter.com/Yt1EYBDKCn

It’s nine miles southwest of Walker, California and 15 miles northwest of Bridgeport, California. Extreme fire behavior is still expected to the north, northwest, south, and east. Single family homes, campgrounds, a military training facility, utilities and power lines, and endangered species could be at risk, according to Inciweb.

The following evacuations are in place as of September 6, according to Inciweb:

Residents and campers have been evacuated by the Mono County Sheriff’s office and the California Highway Patrol from the following areas:

Ranchers are being asked to be ready to move livestock away from U.S. Highway 395 and California State Route 108 if necessary.

“The structures in Devil’s Gate Pass, Swauger Creek and Fales Hot Springs, four miles south of US 395 and CA SR 108 (Sonora Junction) are under a mandatory evacuation.”

Because of the fire’s strong activity, evacuation details could change at any time.

The Delta Fire has exploded in size in just a day. It’s now 15,294 acres after first being reported on September 5 at 12:51 p.m. local time near the Vollmers exit on I-5 north of Lakehead, California. The fire is 0 percent contained. It was initially three fires that merged into one fire. The fire continues to burn on both sides of I-5.  It looks like there’s a chance that the Delta Fire and the Hirz Fire might ultimately merge, according to the interactive map below.

And another, which shows its location in conjunction with the Hirz Fire:

Mandatory evacuations have been issued by the Shasta County Sheriff’s Office “residents along the I-5 corridor between Lamoine north to the Shasta/Siskiyou County line,” Inciweb noted. Numerous structures are threatened by the fire.

According to Inciweb, the following evacuations and closures are in place:

An evacuation shelter is at Mount Shasta Community Center at 629 Alder Street in Mount Shasta.

The fire is believed to be caused by human activity, but officials have not said if they think it was arson or an accident.

The fire is still active and continued spread is expected north into Slate Creek and east toward the Hirz fire region. Active to extreme fire behavior is expected, according to Inciweb.

The Delta Fire information line is 530-498-0953. There’s a high call volume to this line, so leave a message if someone doesn’t answer. 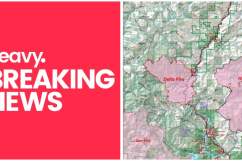 This fire is in the Stanislaus National Forest and is 36,349 acres with 85 percent containment, as of September 5.

A total of 81 structures were destroyed and there were four injuries. The fire started at the inlet of the Donnell Reservoir. No structures are currently threatened. Here are details on current closures as of September 5, per Inciweb:

CAL FIRE is helping Modoc National Forest with this fire, which is located east of Essex Reservoir and northeast of Canby in Modoc County. The fire is still listed as active on CAL FIRE’s map as of September 6, but updates haven’t been shared on the fire in several days.

Although still listed on CAL FIRE’s map, it is no longer considered an active fire and Inciweb is no longer updating details about it. It’s 8,886 acres and 85 percent contained as of August 9.

This fire has been inactive for several weeks and is 95 percent contained, per Inciweb on August 14. It is still listed on CAL FIRE’s map.

This fire is listed on CAL FIRE’s map and is 46,150 acres and 75 percent contained as of September 6. The fire is located north of Moore Creek Campground. It’s 11 miles east of Interstate 5 on Gillman Road near Lakehead, California. It’s 18 miles northeast of Redding, California. The cause is human activity. Because the fire is so close to the Delta Fire, a map of the fire shows both (see above.)

Inciweb noted on September 6 about evacuations and closures:

County residents can sign up to receive emergency updates and critical information through www.shascom911.com using the Code Red program.

The Holy Fire formed on August 6 in the afternoon and quickly grew. The Holy Fire is in Orange County, off Holy Jim Canyon Road, west of the North Main Divide. As of August 29 (the most recent update on Inciweb), the fire is 23,136 acres according to Inciweb, and 93 percent contained.

The cause is under investigation, but authorities have arrested Forrest Gordon Clark on suspicion of felony arson. Read more about Clark in Heavy’s story here.

All evacuations for this fire have been lifted, Inciweb noted.

CAL FIRE is helping the Shasta-Trinity National Forest with this fire, which is near Kerlin Creek west of Hyampom in Trinity County. It’s at 40.628 latitude, -123.508 longitude.

About 100 structures in the area are threatened, but no structures have been lost.

Mandatory evacuations were issued by the Trinity County sheriff on the evening of September 5 for residents on county road 311 from Lake Mountain Ranch to Dead Man’s Point, Inciweb noted. Call 707-902-3749 between 8 a.m. and 10 p.m. for updates.

This fire is listed on the CAL FIRE map. It’s 13,347 acres and 85 percent contained as of September 6. It’s located seven miles southwest of Mammoth Lakes. It was caused by lightning. Most of the fire is on the Sierra National Forest, but about 1,600 acres are on the Inyo National Forest.

Regarding closures, Inciweb noted on September 6:

This Oregon fire falls under the jurisdiction of the Oregon Department of Forestry Fire, but is also listed on the CAL FIRE map. It’s 30,273 acres and 70 percent contained as of September 6, according to Inciweb. It was caused by lightning. It’s located 15 miles southeast of Cave Junction, Oregon, located on the Oregon/California border between Happy Camp, California and Cave Junction, Oregon.

On September 6, Inciweb still reported the following regarding evacuation notifications and fire closures:

CAL FIRE is helping Tahoe National Forest with this fire, which is off North Fork Campground and is south of Emigrant Gap in Placer County. It’s nine miles northeast of Alta at 39.278 latitude, -120.663 longitude, and the cause is under investigation. The fire information line is 925-588-6724, from 7 a.m. to 9 p.m.

#NorthFire remains at 1,274 acres and is now 17% contained. Fire may continue to make slope runs to the north and east. Roll out is of concern to the northeast and southeast. Short-range spotting possible. https://t.co/S2yNvfuHFc pic.twitter.com/omnpORayA6

According to Inciweb on September 6: “Evacuations are in place for the following campgrounds only: Onion Valley CG, North Fork CG, Tunnel Mills CG, Lodgepole CG, Silvertip Day Use Area, and Snowflower RV Resort. There are currently no other evacuation in place.”

The fire is 1,274 acres and 17 percent contained, according to Inciweb on September 6.

CAL FIRE is assisting Los Padres National Forest with this fire (https://inciweb.nwcg.gov/incident/6188/), located northeast of Gibraltar Reservoir in Santa Barbara County. As of September 4, containment was up to 85 percent in a 175-acre fire. No structures were threatened.

This fire was the largest in California’s history, but now it is almost completely contained. It’s off Highway 20 near Potter Valley, northeast of Ukiah in Mendocino/Lake/Colusa Counties. It’s now 459,123 acres and 98 percent contained as of September 6. It was comprised of the River and Ranch fires, although the River fire has been 100 percent contained. The River fire grew to 48,920 acres and the Ranch Fire grew to 410,203 acres. The cause of this fire is still under investigation.

According to Inciweb (https://inciweb.nwcg.gov/incident/6073/), the following evacuations and closures are still in effect:

This fire, off Sliger Mine Road and Hida Way, is northwest of Georgetown in El Dorado County. It’s 104 acres and 45 percent contained. All evacuation orders have been lifted, according to CAL FIRE (see more here: http://www.fire.ca.gov/current_incidents/incidentdetails/Index/2238.)

The Valley fire is 1,350 acres and 82 percent contained as of August 30. It’s at the Valley of the Falls Dr. and Service Road 1S08. According to Inciweb, minimal to no growth is expected and very little fire spread is expected. However, hot and dry conditions have helped the fire stay active. Inciweb isn’t actively updating this every day. The cause of the fire is under investigation. The Valley Fire Closure Area was lifted on August 30, Inciweb noted, and San Gorgonio Wilderness was reopened.