Update: Jayce Cosso and his father, John Cosso, were found at a hotel in Dublin, California around 8 a.m. Tuesday, September 25. Dublin is about 60 miles west of Jayce’s home in Modesto. The Modesto Police Department shared that Jayce is safe. We will update this story as more information becomes available about potential charges.

Jayce’s mother, Kimberly Valente, expressed her gratitude on Facebook, writing, “I have no words yet. Haven’t spoken to anyone on law enforcement side yet but I got a text saying he was found and safe this morning. Thank you!!!!! On my knees in praise. On my knees in so much praise. Appreciation for every soul, every breath, every prayer. I have no news that you don’t have. What you all know, at this minute, is all I know. He’s safe. Was found at a motel in Dublin. That’s all I know. “Thank you” doesn’t even touch what I feel.”

An Amber Alert was issued in California for 6-year-old Jayce Cosso on Monday, September 23. Police in Modesto, California say the child’s father, John Cosso, took the child by force from his mother’s home. Valente described the violent ordeal in detail.

1. Jayce’s Aunt Said the Child Begged His Father Not to Take Him Away From his Mother

The Modesto Police Department issued the photo above of 6-year-old Jayce. He was last seen wearing a black Transformers t-shirt and faded green camouflage shorts.

According to the Amber Alert, Jayce is about 2 feet 6 inches tall and weighs about 34 pounds. He has brown hair and brown eyes.

Police say Jayce was kidnapped from his mother’s home around 7:30 a.m. on Monday, September 23 by his father, John Cosso. His aunt, Vanessa Valente, told KCRA-TV that Jayce pleaded with his father not to take him away from his mother. She told the news outlet that Jayce said, “Please no, Daddy. I don’t like you. You’re not my friend.”

2. Jayce’s Mother, Kimberly Valente, Said Her Son Was Ripped Out of Her Arms and Described the Ordeal in Detail to the Local Newspaper

Kimberly Valente, Jayce’s mother, described the kidnapping to local news outlet the Modesto Bee. She described John Cosso as her estranged boyfriend. She said one of the young men who helped Cosso take Jayce was Cosso’s 17-year-old son, Dominic.

Valente said the situation began with a knock on the door. It was a stranger claiming to be from the gas company. But Valente said she noticed Dominic’s vehicle in the driveway, and became suspicious. She and her sister, Marlisa Angervil, bolted the door shut. She said that’s when the three men began pounding on the door. Valente’s three older sons were also at the home, and tried to keep the door shut.

Valente yelled for her sister to call police while she tried to take Jayce away. But she said the men forced their way inside, getting by the others using pepper spray. Meanwhile, Valente had made it to her car with Jayce. She tried to drive away, but one of the other cars was blocking her in.

Valente told the newspaper that Cosso and the other two men banged on the car windows. Another family member told police that one of the men grabbed a tool box, smashed the driver’s side window, and pulled Jayce from his mother’s arms.

3. Valente Was Reportedly Working to Obtain Sole Custody of Jayce

Kimberly Valente said John Cosso was her estranged boyfriend and that they shared custody of Jayce. But she was reportedly working to obtain sole custody of her son and had recently hired an attorney.

A family member told the Modesto Bee that Cosso allegedly had a history of violence. He reportedly had gotten physical with Valente, and was accused of being abusive toward two other women. They also said he mistreated Jayce, and was emotionally abusive.

Online court records for Stanislaus County do not show recent custody papers as of September 23, 2018. But records do show that Valente appears to have sued Cosso in 2014 for child support. The case was filed in family court as “Miscellaneous Petition for Custody and Support.” The case was dismissed in 2017. One interesting detail that stands out is from November 2016, when there appears to have been a domestic violence hearing. The online record does not divulge details of what prompted such a hearing. 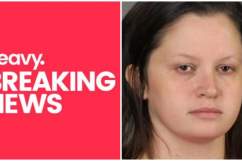 4. John Cosso is Described as Having Tattoos On His Face

John Cosso reportedly has distinguishable features. The Amber Alert states that Cosso currently has a shaved head and tattoos on his face, however the picture issued by police does not appear to show any tattoos. He is 5 feet, 11 inches tall and weighs about 190 pounds. The alert did not issue any clothing information.