Getty The vocabulary word "lodestar" was used in the groundbreaking NYT article penned by an anonymous Trump official who revealed a secret "revolution" inside the White House.

On Wednesday afternoon, The New York Times released a bombshell op-ed that was, in a rare move, released by an anonymous writer.

The piece was written by a senior Trump official who wished to reassure Americans that there was a secret resistance in the Trump administration, working to counter the president’s “amorality” and potentially working together to use the 25th Amendment to oust Trump from power.

But there was one word in particular that struck many Twitter users as conspicuous: “lodestar.”

In the op-ed, the anonymous Trump official wrote, “We may no longer have Senator McCain. But we will always have his example — a lodestar for restoring honor to public life and our national dialogue. Mr. Trump may fear such honorable men, but we should revere them.”

According to the Merriam-Webster Dictionary, a lodestar is “a star that leads or guides,” or “one that serves as an inspiration, model, or guide.”

A simple enough definition- but here’s why people are freaking out about it.

The Word ‘Lodestar’ Was Used in the Op-Ed, & Pence Is Known for Using the Word

And lo, as I have shown in my previous tweets, peaches and nectarines are absolutely delicious, and Vice President Mike Pence really likes using the word "lodestar" in his writing. In fact, one might call it his…

The word “lodestar” was conspicuously used in the New York Times op-ed, specifically to describe the influence of the late Sen. John McCain.

Immediately, hordes of Twitter users began to connect the unusual word with Vice President Mike Pence, who has been known to use the word repeatedly throughout his vice presidency.

One Twitter user in particular pointed out that John Kelly and James Mattis, two other senior Trump officials under speculation for the article, have never once used the word “lodestar.”

On the other hand, Pence has used the word on multiple occasions.

Of course, this does not directly implicate Pence with the article; if anything, it could be an easy way for another Trump official to send the suspicion in his direction. But it’s worth noting, given what an unusual word “lodestar” is. It’s also worth noting that The New York Times has since confirmed it did not re-write the op-ed in any way.

CNN has since released a list of the 13 most likely authors for the op-ed, and Pence is one of them. He is joined by the following senior Trump officials, who might have written the piece:

Of the 12 other likely authors, none of them have been connected to the verbiage of the op-ed in the way that Pence has. Then again, all of them could be entirely aware of the direction that the media would go if “lodestar” was inserted into the piece. 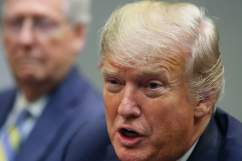 Who Is the Trump Official Behind the Anonymous ‘NYT’ Op-Ed Article?

Read More
Donald Trump, Politics
wpDiscuz
0
0
Would love your thoughts, please comment.x
()
x
| Reply
The vocabulary word "lodestar" was used in the groundbreaking NYT article penned by an anonymous Trump official who revealed a secret "revolution" inside the White House.