Meghan McCain’s husband, Ben Domenech, criticized Twitter for not immediately removing a violent post that showed a gun pointed at his wife as she cried over her father’s casket. You can see the image below, but be aware that it’s very disturbing because it essentially is a threat to shoot Meghan McCain at her own father’s memorial.

Meghan, who gave a speech about her father at the national memorial service on September 1, 2018, has been very emotional at the various memorial services held for her dad, John McCain, who died of brain cancer.

Although many throughout the nation have rallied around the McCain family and paid tribute to John McCain’s service, that wasn’t the case with one Twitter user who posted a violent picture about Meghan McCain. Meghan McCain’s husband Ben Domenech is a publisher at the Federalist, a conservative publication. On Twitter, he defines himself as, “Publisher @FDRLST, newsletter @TheTransom, contributor @CBSNews, radio host, libertarian. You can tell a man’s vices by his friends, his virtues by his enemies.”

Ben Domenech Questioned Why Twitter Did Not Immediately Remove the Image

In his original tweet, Domenech shared the offending image and wrote to Twitter CEO Jack Dorsey on Twitter, “Hey @jack, this has been up for half a day. It has been reported 100+ times. No response. Tell me why this is cool by you.” The photoshopped image was posted by a Twitter user with the handle @austindelafrog and the caption “America, this ones (sic) for you.”

On August 31, 2018, Domenech wrote, “Twitter finally suspended this account this morning. No one should have to raise a ruckus or highlight this sort of thing publicly to get their attention.”

He added, “It took my hours later tweet to finally get a reaction. Did not want to elevate it but that is what Twitter requires apparently. Oh, and the reaction was from the guy, not Twitter. Looks like he set his account to private.”

He later wrote, “I am going to delete the initial tweet now so no one has to see it. Still want an explanation for why something so obviously in violation took so much attention for Twitter to react.”

Twitter’s rules state, “You may not make specific threats of violence or wish for the serious physical harm, death, or disease of an individual or group of people. This includes, but is not limited to, threatening or promoting terrorism.”

Meghan McCain married Ben Domenech in November 2017 with her father at her side. The wedding took place at the McCain family lodge in Sedona, Arizona.

You can read more about Meghan McCain and Ben Domenech here: 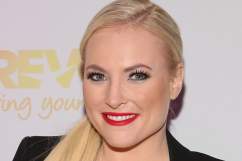