Getty Was Mike Pence the NYT op-ed writer? Many people on the betting circuit believe he is.

In an explosive move, The New York Times released an op-ed written by an anonymous Trump official which revealed details of a “secret revolution” occurring inside the White House.

The article also detailed the chance of the Cabinet potentially evoking the 25th amendment, which would oust President Trump and replace him with Vice President Mike Pence.

In the wake of the explosive article, thousands of Twitter users began to speculate who the senior official was that had written the letter, many of them citing Pence as the author.

The Vocabulary Word ‘Lodestar’ Was a Huge Tipoff

At one point in the article, the author uses the conspicuous word “lodestar” to describe the late Sen. John McCain. The author wrote, “We may no longer have Senator McCain. But we will always have his example — a lodestar for restoring honor to public life and our national dialogue. Mr. Trump may fear such honorable men, but we should revere them.”

The only Trump official who has used the word “lodestar” previously is Pence- and he’s used it on several occasions.

In a CBS interview, Pence said, “As you know we made changes as soon as I took over the transition efforts. We made changes — we moved lobbyists out of the transition team and that’s going to continue to be a lodestar and I can tell your viewers that the president-elect is determined to move ethics reform in the next year in the Congress of the United States.”

In a speech at the UN, Pence said, “So let us rededicate ourselves to the mission upon which this body was founded — the first words of the U.N. Charter, ‘to maintain international peace,’ must again be our lodestar, our ideal, and our aspiration.Through reform of our efforts and reform of this institution, through renewed courage to speak and act whenever and wherever the unalienable rights of innocent people, or the peace of the world, is at risk we will create, as our President said, a more safe and peaceful future for all mankind.”

Others have speculated that Pence’s speechwriter had a hand in the article, and that it was just second-nature to include a word that the Vice President loves.

Pence has been using the word “lodestar” in speeches dating back as early as 2001. Other Trump officials like James Mattis and John Kelly have never uttered the word publicly.

Does the so-called “Senior Administration Official” really exist, or is it just the Failing New York Times with another phony source? If the GUTLESS anonymous person does indeed exist, the Times must, for National Security purposes, turn him/her over to government at once!

Another reason for why people think Pence might have authored the op-ed is that he is the most senior Trump official, and has the highest amount of job safety.

However, that doesn’t mean he’s entirely protected from Trump’s power, and according to a CNN source, Trump has been on a “rampage” in the wake of the article release. Trump also tweeted out that the official was either “GUTLESS” or non-existent.

CNN has released a list of the 13 most likely Trump officials to have authored the op-ed, and Pence is one of them. Only time will tell whether he truly was the author. 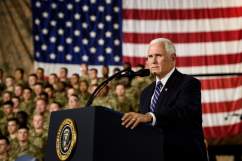 What Does ‘Lodestar’ Mean, & Why Are People Using it to Implicate Mike Pence?

Loading more stories
wpDiscuz
0
0
Would love your thoughts, please comment.x
()
x
| Reply
In the wake of the explosive NYT article that revealed details of a "secret revolution" in the White House, many have speculated whether Mike Pence is the author.