Facebook Tammie Hedges was arrested last week after turning a warehouse into a temporary shelter to take in two dozen dogs and cats displaced by Hurricane Florence.

Tammie Hedges, the founder of Crazy’s Claws N Paws animal rescue, was arrested last Friday after turning a warehouse into a temporary shelter in North Carolina to take in two dozen dogs and cats displaced by Hurricane Florence.

Hedges was charged with practicing veterinary medicine without a license, and every one of the animals she was attempting to help was confiscated by Wayne County, according to the Washington Post.

Thousands of people have rallied behind Hedges, who said in a statement that she and the volunteers that assisted her “did what they had to do to help animals displaced by the storm.”

Here’s what you need to know about Hedges:

1. Hedges Was Arrested After an Official from Wayne County Animal Services Visited the Temporary Shelter & Had Concerns That Hodges Was Administering  Veterinary Care to the Animals Without a License

County officials arrested Hedges after an official from Wayne County Animal Services went to the warehouse at the request of the state Department of Agriculture, which oversees veterinary services.

The official, according to a statement from the county, “developed serious concerns” that Hedges was practicing veterinary medicine without a license.

Hedges surrendered the animals to the county’s Animal Services department, which is reuniting them with their owners, officials said. 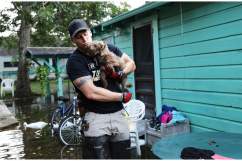 How to Help Animals Displaced by Hurricane Florence

2. Hedges Was Charged With a Dozen Misdemeanor Charges For Administering Medications Without a Veterinary License

Hedges was charged with several misdemeanor charges and was accused of practicing veterinary medicine without a license. Specifically, she is charged with administering medications such as amoxicillin and a topical antibiotic ointment to the animals, according to the nonprofit’s Facebook page. The group said she is also facing one count of solicitation of a Schedule IV controlled substance for asking for a donation of tramadol, a prescription pain medication used for animals.

“Many of the animals were sick, injured and neglected. Some cats were covered with so many fleas that volunteers had to scrub their play pen with bleach twice. One cat had a bleeding cut on its neck, and Hedges treated the wound with an ointment she bought from a Dollar Tree store,” a volunteer that was assisting Hedges at the time told the Washington Post.

Woman helped rescue pets from hurricane flooded areas & now she may face charges.
Officials want to charge Tammie Hedges of Crazy's Claws n Paws for operating an unregistered Shelter.
Was she meant to allow the animals to suffer & drown??
I applaud her!!https://t.co/uXlna9dmm1

Hedges, who founded and runs a nonprofit organization called Crazy’s Claws N Paws that helps low-income families with veterinary bills and pet supplies, said in a statement that they did what they had to do to help the animals. She and others turned the warehouse into a temporary shelter, equipped it with crates, kennels, litter boxes and blankets, and asked for donations through social media. The warehouse was already in the process of being remodeled to turn it into a state-approved shelter.

“We had a plan. We had the calls for help, but we didn’t know where to put the animals. . . . We came together as a community during a difficult time to help,” wrote Hedges.

3. A Volunteer Who is Familiar With Hedge’s Nonprofit Organization Claims There Was Nowhere Else For the Animals to Go

Kathie Davidson, who volunteers Crazy’s Claws N Paws, said that the animals had nowhere else to go and that veterinary offices had closed ahead of the storm, according to the Washington Post. There was an emergency veterinary clinic in another county, but she said it was “impossible to transport 27 animals in the middle of a storm.”

“She had to do what she did. If she hadn’t done what she did, then they’ll be charging her with animal neglect and cruelty. … The Wayne County animal shelter has taken issue with that because it wasn’t a hundred percent by the book and by the law,” said Davidson. “What was she supposed to do? The animals were sick and hurting.”

The county disputed her claims that the animals had nowhere else to go. Wayne County spokesman Joel Gillie said that the county’s shelter had enough room for displaced animals, although it could not accept pets that owners wanted to surrender. 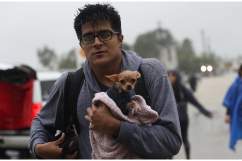 How to Keep Pets Safe During Hurricanes & Natural Disasters

4. A GoFundMe Page Has Raised Over $40,000 to Help Hedges With Legal Fees & a Petition Was Started, Urging the County to Drop the Charges

This women rescued 18 animals before the hurricane and now she's being arrested. https://t.co/JZZPiOHTfq

After Hedges arrest on Friday, many have since rallied behind her. A GoFundMe page has raised more than $40,000 of the $20,000 goal to help with her legal fees.

“Tammie recently rescued abandoned animals that people had left behind or that were lost during hurricane Florence in North Carolina,” a description on the page reads. “Her successful efforts in Saving these animals should not be punished. She willingly surrendered the animals to the officials that were asking for them.”

A petition was also started that has nearly 30,000 signatures, demanding the charges against Hedges be dropped. An update posted on the petition stated that the charges were dismissed, but is waiting to confirm the news before making a statement.

5. Charges Against Hedges Were Dropped Monday, According to a Statement on the Wayne County Government Facebook Page

Wayne County Government posted an update on their Facebook page stating that the charges against Hedges have been dismissed. They released a lengthy statement that claims that, although they dropped the charges against Hedges, District Attorney Matthew Delbridge feels they were in the right to seize the animals and charge her in the first place. They accused Hedges of “taking advantage of a dire situation to solicit money and opioid narcotics” from the community, and that the county felt the building that she housed the displaced animals in “failed to meet suitable standards for license as an animal shelter.”

“The protection of animals and their well-being has always been an important concern, especially during times of natural disaster. A passion for and the love of animals is laudable but does not excuse unnecessarily putting their health at risk when other, safer resources are available. The removal of animals from a building that failed to meet suitable standards for license as an animal shelter and away from the control of this defendant who has previously been censured for the unauthorized practice of veterinary medicine was a prudent decision made with the best interest of the animals in mind.”

The statement continued: “This was especially true in light of her taking advantage of a dire situation to solicit money and opioid narcotics from our generous and well intentioned citizens. It is my desire that having ensured the safety of the animals in question, a dismissal of these criminal charges will minimize further distraction from my core mission of protecting the public from violent crime and allow the North Carolina Veterinary Medical Board to take whatever action they may deem appropriate.“

The petition also gave an update stating that the charges were dropped, but that Hedges wouldn’t be making an official statement until the news was confirmed.

“UPDATE 9/25/18, 4:22 PM: Tammie has been made aware of the charges being dismissed, but is waiting for confirmation before an official statement is made. You all have been the voice of defenseless animals and Thank you, everyone, for your support and please share!”