Hurricane Michael hit the Panhandle of Florida on Wednesday. According to USA Today, the hurricane could rival the worst storms on record to hit that part of the state. It struck at Category 4 intensity, bringing with it storm surge flooding, destructive winds and flooding rainfall.

“Michael could develop into a potentially catastrophic event for the northeastern Gulf Coast,” wrote the National Weather Service. “The greatest threats include the danger of life threatening storm, surge along the Florida Panhandle and Big Bend coastlines and
damaging winds that will result in widespread power outages that may last days.”

Hugely disappointed that #HurricaneMichael is not named Hurricane Michael Scott. Seriously, what kind of country are we living in? pic.twitter.com/5fyteUEowA

To cope with this worrisome situation, the internet has seen fit to take Hurricane Michael and provide comic relief through a series of memes. Of course, these memes aren’t referencing the damage that Hurricane Michael is predicted to inflict on Florida, but rather the many puns and pop culture references that online users have concocted.

The most common references have been to Michael Scott, the character played by Steve Carell on the NBC sitcom The Office. The character’s strange behavior and quotable lines have proven to be the perfect meme outlet for the incoming hurricane, and users have been quick to draw the comparison. This is especially the case with memes where Michael Scott is panicked or trying to cope with a serious situation. Check out some of the most notable examples below.

Me: “Joey, have you heard there’s a storm out in the ocean?”

Hurricane Michael is coming towards Florida and all I can think of is Michael Scott pic.twitter.com/ZvwS388IE5

Get ready my Southern friends. Michael is coming and we all know how unpredictable he can be. What will be the worst thing about Hurricane Michael? The #Dementors, I'm sure. Threadish.etsy.com #etsy #threadish #michaelscott #prisonmike #theoffice #theofficeedit #theofficefans #theofficememes #memes #hurricanememe #hurricane #florida #TampaBay #fl #forecast #shopsmall #handmade #goodbyetoby #funnystuff #funny #hurricanemichael #weathermemes #geek #theoffice

Others Have Memed Michael Myers from the ‘Halloween’ Films

There have also been memes with other famous characters named Michael, including Michael Myers, the antagonist of the Halloween movie series, and . The latter has been especially popular with Twitter users, given that its October and Myers is set to return in the upcoming Halloween, a sequel to the original 1978 film. “Hurricane Michael approaches Florida just as the new Michael Myers movie is about to be released,” wrote one user. “It’s no coincidence. Hurricane Michael is currently being pursued by Hurricane Dr. Loomis. The eye of the storm is pure evil!”

“Hurricane Michael? Halloween coincidence…Michael Myers? Anyone? Nobody?,” asked another user. “This thing on? In all seriousness, FL residents should take every storm seriously, these things have minds of their own. Stay safe.”

Well, it's Halloween season and we get Michael not once, but two times this month. Michael Myers. & Hurricane Michael. ? pic.twitter.com/n3FpSI5gmd

Hurricane Michael Myers decided to visit us in October pic.twitter.com/AJaNYkzmPC

#HurricaneMichael Myers is coming towards my state Alabama !?!?!? Come to me Michael lol hurricane in October named after Michael Myers is spooky lol pic.twitter.com/Wjv1FtHCkz

Everyone take heed and be careful. Hurricane Michael Myers is on the way. ?☕ #HurricaneMichael pic.twitter.com/dTRC6clsrI

When it's October and hurricane season and they decide to name it Michael!!!???? #HurricaneMichael #Hurricaneseason2018 #Besafe #MichaelMyers #Halloween2018 #michealmyers?

Other popular Hurricane Michael memes include references to pop singer Michael Jackson and his signature moonwalk dance. “He’s coming… be careful out there,” wrote one Instagram user. “#hurricanemichael hopefully just rain for us.”

Watch the whole thing! This took me a long time to make and I hope you like it! #hurricanemichaeljackson 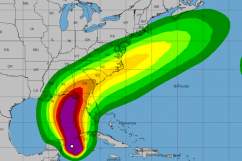