Cooke County Jail Lynn Burge, a 32-year-old former teacher at Muenster High School in Texas, is accused of having an improper relationship with two students.

A former Texas high school teacher has been arrested after she was accused of sexually assaulting two students. Lynn Burge faces several charges after she was taken into custody on October 18 following an investigation by the Texas Rangers that lasted about a month, the Gainesville Daily Register reports.

The 32-year-old former teacher at Muenster High School sexually assaulted a 16-year-old and an 18-year-old student on separate occasions, police told the Daily Register. Burge sent at least one of the students nude photos through the Snapchat messaging app, according to police.

Burge sexually assaulted both students after giving them alcohol and going “backroading” with them, the newspaper reports. The investigation is ongoing, police said. It is not clear if police believe additional charges could be warranted or if there are any other victims.

1. Burge Told Police She Was ‘Highly Intoxicated’ During Both Incidents With Her Students & Doesn’t Remember What Happened the Night She Is Accused of Sexually Assaulting the 16-Year-Old

On October 8, Texas Ranger Bruce Sherman took over the investigation, according to the Daily Register. The 16-year-old student told investigators Burge was his teacher during the 2017-2018 school year, and in about September or October 2017 she began communicating with him on Snapchat. According to the arrest warrant obtained by the newspaper, Burge and the student then began exchanging nude photos on the messaging app. The 16-year-old said he and Burge went “backroading” together and drank alcohol. When they got back to her home, the student says they began kissing and took off each other’s clothes and she performed oral sex on him, police said. They then “had sex” in the kitchen, according to the report. The boy said he fell asleep in Burge’s children’s bedroom, but she later asked him to get in bed with her. The kids were not home at the time, he told police.

The 18-year-old student told police he had “unprotected sex” with Burge on her birthday at her sister’s home after they went “backroading” together, the newspaper reports. According to KXII-TV, Burge also sent nude photos to the 18-year-old and started with communications on Snapchat.

Police interviewed Burge in early October while she was on a school field trip at the State Fair of Texas in Dallas as a chaperone, KXII reports. During that interview, she told Ranger Sherman she had sent ‘five or less” naked photos to the 16-year-old on Snapchat. She also said she remembered going “backroading” with the 16-year-old in December 2017 or January 2018 while she was intoxicated. But she said she couldn’t remember anything else that happened.

According to the Daily Register, Burge confessed to “having sex” with the 18-year-old student, but said she was also intoxicated that night and could not remember details. Burge told investigators she doesn’t recall having memory issues previously, the newspaper reports.

Burge taught family and consumer sciences at Muenster High School, according to the district’s website. She was in her second year with the Muenster school district. It is not clear where she worked prior to being hired in Muenster.

“The 2018-2019 school year will be full of learning and excitement. I will be teaching Intro to Culinary Arts, Child Development and Principles of Human Services as well as the FCCLA advisor. Looking forward to an exciting and fun year!” she wrote on her now-deleted bio page on the Muenster High School website. FCCLA is the Family, Career and Community Leaders of America student organization.

“Mrs. Burge is no longer employed by MISD, and the district is currently conducting an investigation into the alleged misconduct. Federal privacy laws prevent me from providing further details. The district considers safety to be its highest priority and is committed to ensuring the well-being of MISD students,” Muenster ISD Superintendent Steven Self said in a statement. Burge’s last day with the school district was October 12, Self said.

3. Burge Is Married & Has 2 Young Children

Lynn Sicking Burge has been married to her husband since 2012, according to Texas marriage records. She and her husband were married on September 22, 2012, in Rains, Texas.

Burge and her husband have two young children and live in Alba, Texas, according to public records. Burge often posted about her kids and teaching on her Twitter and Instagram profiles. She deleted her Instagram and Facebook after her arrest.

“Sunday Funday with my crew…Church, Burgers, and Gators!” she said along with a photo of her children at an alligator farm. In another tweet, she wrote, “God sure knew what he was doing when he gave me these two,” along with another photo of her kids.

Burge and her husband could not be reached for comment. 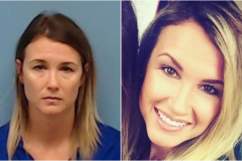 4. She Faces Up to 50 Years in State Prison if Convicted of All the Charges Against Her

Lynn Burge was charged with two counts of improper relationship between an educator and a student and one count of online solicitation of a minor. She faces up to 50 years in prison if convicted of all three charges, according to Texas state law.

It is not clear if she has hired an attorney. Information about her next court date was also not immediately available.

5. Burge Posted $125,000 Bail the Day After She Was Arrested & Booked Into the Cooke County Jail

Lynn Burge was released from custody on October 19, one day after her arrest, on $125,000 bail. She was held overnight at the Cooke County Jail, records show. Her arrest shocked the quiet Cooke County town, KXII-TV reports.

“They are adults and they need to act like it. You send your kids to school every day hoping they are being taken care of, and not being taken advantage of,” a mother of students in the Muenster ISD told the news station. She asked to remain anonymous, according to KXII. “hat’s going on after school? They should not be giving out phone numbers, and email addresses are fine. But there should not be an exchange on a personal level. There’s a professional border that you have to keep there between your students and yourself.”