WATCH: @senorrinhatch tells a group of women and survivors to “grow up” as he laughs in their faces. #BelieveSurvivors pic.twitter.com/ZMe4Rslret

Senator Orrin Hatch of Utah faced a group of protesters as he was waiting for an elevator on October 4. The confrontation seen in the video above happened soon after Hatch and other Senate Republicans spoke about the FBI background investigation into Brett Kavanaugh.

The video appears to have originated from the Twitter handle @VoteProChoice, a Democratic entity. The poster claimed the women talking to Senator Hatch were survivors, presumably of sexual assault. We have reached out to the group for clarification on that.

Kathy Beynette of Leesurg, Virginia was telling Hatch her son was a first responder in 9/11 and her father served in WWII as Hatch laughed at her.

One of the women is heard asking Senator Hatch, “Why aren’t you brave enough to talk to us and exchange with us? Don’t you wave your hand at me! I wave my hand at you!”

Senator Hatch turned to the group and said he would talk when they “grow up.” This prompted the entire group to shout after him as he entered the elevator, with security officials blocking them from getting any closer. One of the women could be heard yelling, “How dare you talk to women that way?!”

Hatch then waved his hand at the group. One of the senator’s security members can be heard asking the women to back up and not block the elevator. He warned they could be arrested.

@VoteProChoice identified one of the women by name in the comments section as Kathy Beynette. The group claims that she was “telling Hatch her son was a first responder in 9/11 and her father served in WWII as Hatch laughed at her.” 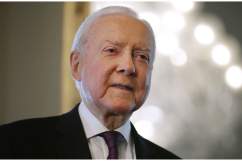 Senator @OrrinHatch: "I'm disappointed in my Democratic colleagues for what they're doing. There's no excuse for it, but they're doing it." pic.twitter.com/VuybTzuHEf

As referenced above, this confrontation occurred soon after GOP senators held a news conference about the FBI investigation of Brett Kavanaugh. They said the probe did not reveal any corroborating evidence to support claims of sexual misconduct brought forward by Christine Blasey Ford and Deborah Ramirez. Senator Hatch, along with others including Senate Judiciary Chairman Chuck Grassley and Texas Senator John Cornyn, called on their colleagues to vote “yes” to confirm Kavanaugh to the high court.

Senator Hatch remarked “we need to confirm him right away.” He went so far as to call Kavanaugh “one of the best nominees I’ve seen in my 42 years in the Senate.”

Tearful woman confronts Senator Flake on elevatorSen. Jeff Flake, minutes after he announced he will support Supreme Court nominee Brett Kavanaugh, was confronted at the US Capitol Friday morning by two women who say they are sexual assault survivors.2018-09-28T14:33:17.000Z

Hatch is the second senator to be confronted in a Senate elevator by protesters in recent days. Senator Jeff Flake was approached by two sexual assault survivors on September 28, after he had revealed he would vote in favor of moving Kavanaugh’s nomination to the Senate floor.

The Senate was expected to hold a procedural vote on Friday, with a final vote expected to happen on Saturday. But thousands of protesters marched in Washington D.C. today to ask their senators to stop Kavanaugh’s confirmation.

Read More
Breaking News, Politics, Supreme Court
Senator Orrin Hatch told a group of protesters to "grow up" as he entered an elevator.