California is still being ravaged by wildfires, displacing thousands of families, destroying entire towns and forcing tens of thousands more to evacuate from all over the state. More than 30 people have been killed so far, and that number may yet rise.

One of the deadliest fires incinerating the state is the Camp Fire, which broke out early Thursday morning, burning 80 acres per minute and devastating the northern town of Paradise. The Woolsey Fire broke out to the south in Ventura and Los Angeles Counties shortly after, prompting the evacuation of all of Malibu.

It was only a few short months ago that California dealt with another deadly outbreak of wildfires, and as the frequency of these devastating fires continues to grow, many are left wondering what it is about California that makes wildfires so catastrophic. Although President Donald Trump recently tweeted that the fires were due to poor forest management and threatened to withhold federal aid if the problem wasn’t remedied, the reality behind the increase in large fires in California is due in large part to climate change, among other factors.

Because California receives the majority of its rainfall and moisture in the fall and winter and the summer receives very little, California’s vegetation continues to dry out throughout the hot summer months, producing the perfect conditions for the raging wildfires that seem to engulf the state more frequently as of late.

“Fire, in some ways, is a very simple thing,” Park Williams, a bioclimatologist at Columbia University’s Lamont-Doherty Earth Observatory, told the New York Times. “As long as stuff is dry enough and there’s a spark, then that stuff will burn.”

Although California’s climate makes the state extremely susceptible to wildfires, the link between climate change and bigger fires is “inextricable,” according to the New York Times. “Behind the scenes of all of this, you’ve got temperatures that are about two to three degrees Fahrenheit warmer now than they would’ve been without global warming,” Dr. Williams said. That dries out vegetation even more, making it more likely to burn.”

Climate change is caused by the increase of greenhouse gases such as carbon dioxide that are created by burning fossil fuels. Greenhouse gases build up in the atmosphere, trap heat and warm the planet. 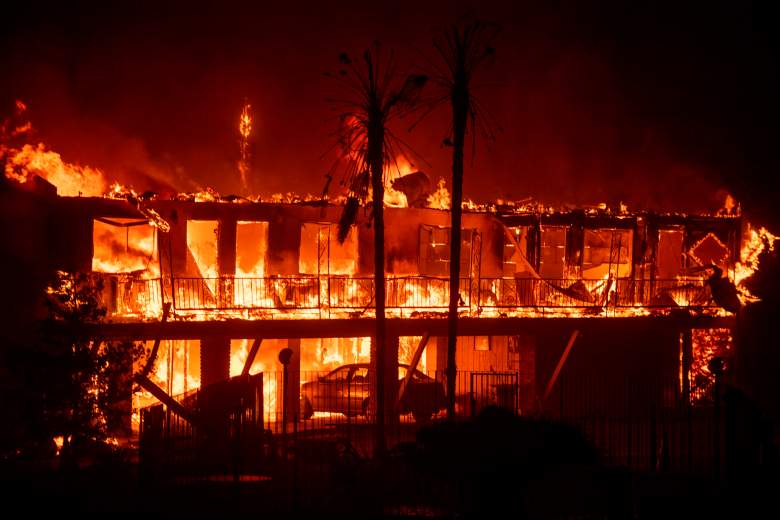 GettyThe Paradise Inn hotel burns as the Camp Fire tears through Paradise, North of Sacramento, California on November 08, 2018. – More than one hundred homes, a hospital, a Safeway store and scores of other structures have burned in the area and the fire shows no signs of slowing. (Photo by Josh Edelson / AFP) (Photo credit should read JOSH EDELSON/AFP/Getty Images)

Dr. Williams continued: “In pretty much every single way, a perfect recipe for fire is just kind of written in California,” Dr. Williams said. “Nature creates the perfect conditions for fire, as long as people are there to start the fires. But then climate change, in a few different ways, seems to also load the dice toward more fire in the future.”

According to the New York Times, California’s fire record dates back to 1932. “Out of the 10 largest fires since then, nine have occurred since 2000, five since 2010 and two this year alone, including the Mendocino Complex Fire, the largest in state history,” the New York Times reports.

Because the average temperature has risen several degrees, the already dry climate in California is subjected to even more heat, which means even more drying. The hot air continues to suck the moisture out of the ground and surrounding vegetation, creating the perfect conditions for the smallest spark to create a devastating wildfire.

“And it doesn’t take much,” Jennifer Balch, a fire ecologist at the University of Colorado, told KUNC. “With just a little bit of drying you get a substantial increase in the amount of burning.” 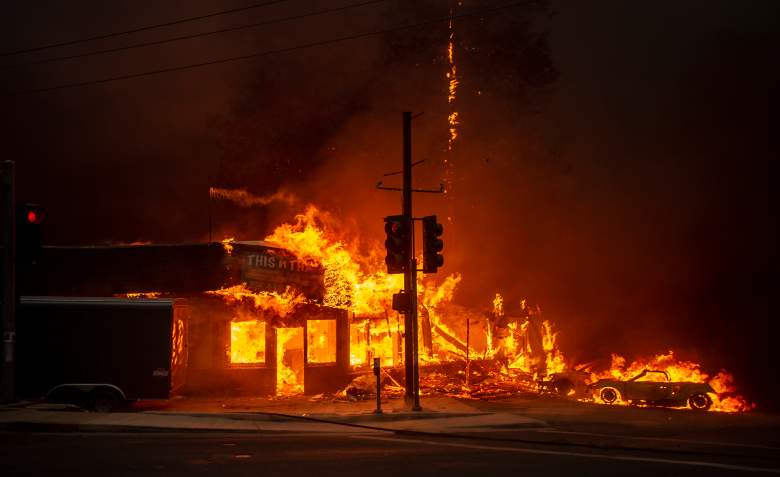 Although some wildfires are caused by acts of nature (such as a lightning strike), more often than not the initial spark is caused by people. According to Balch that 84 percent of wildfires in the U.S. in the past two decades have been started by people.

The expanding population, combined with the carelessness of people and the increasing amount of homes, buildings and neighborhoods constructed near forests has also contributed significantly. “We … have more and more people moving, literally building homes, in the line of fire,” says Balch. “And today there are about 1.8 million homes at high fire risk across the Western U.S.”

The Carr Fire that broke out in late July of this year started when a truck blew out its tire and its rim scraped the pavement, sending out sparks that ignited the dry vegetation.

“California has a lot of people and a really long dry season,” Dr. Williams told the New York Times. “People are always creating possible sparks, and as the dry season wears on and stuff is drying out more and more, the chance that a spark comes off a person at the wrong time just goes up. And that’s putting aside arson.”

The Santa Ana Winds & Fire Suppression Has Also Contributed to an Increase in Deadly, Quick-Spreading Wildfires 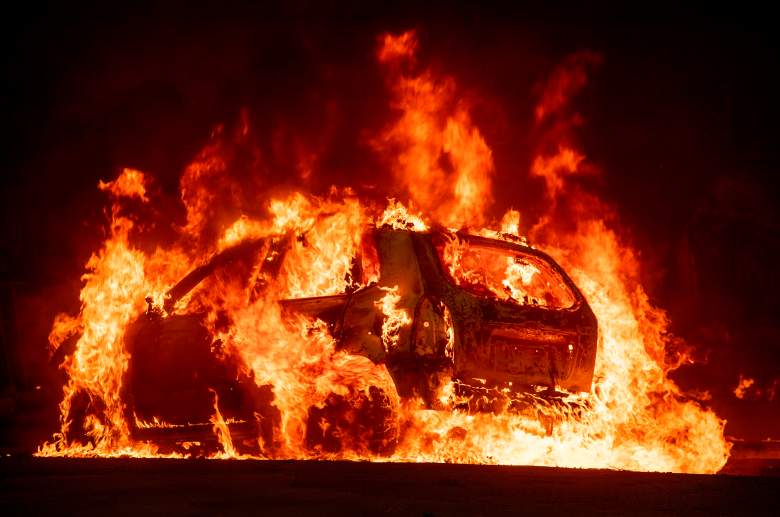 According to the New York Times, both the United States’ history of suppressing wildfires combined with the Santa Ana winds have contributed to the increasing volume of deadly fires in California. The fact that the U.S. successfully fought wildfires allowed more vegetation to grow, creating more burnable material.

“For the last century we fought fire, and we did pretty well at it across all of the Western United States,” Dr. Williams told the New York Times. “And every time we fought a fire successfully, that means that a bunch of stuff that would have burned didn’t burn. And so over the last hundred years we’ve had an accumulation of plants in a lot of areas.

Strong gusts of wind known as the Santa Ana winds blow in each fall, bringing dry air from the Great Basin area of the West into Southern California, Fengpeng Sun, an assistant professor in the department of geosciences at the University of Missouri-Kansas City told the New York Times. The Santa Ana winds generally blow from October through April, creating the deadly conditions for fire season.

“Those fires tend to spread three times faster and burn closer to urban areas, and they were responsible for 80 percent of the economic losses over two decades beginning in 1990,” the New York Times reports.

There is no reason for these massive, deadly and costly forest fires in California except that forest management is so poor. Billions of dollars are given each year, with so many lives lost, all because of gross mismanagement of the forests. Remedy now, or no more Fed payments!

President Trump received a tremendous amount of backlash for threatening to withhold federal funding from California while the deadly fires continued to burn the state, decimating towns and killing several dozen people.

“There is no excuse for these massive, deadly and costly forest fires in California except that forest management is so poor,” he wrote on Twitter. “Billions of dollars are given each year, with so many lives lost, all because of gross mismanagement of the forests. Remedy now, or no more Fed payments!”

He doubled down Sunday in another tweet, again blaming forest management and writing: “With proper Forest Management, we can stop the devastation constantly going on in California. Get smart!”

According to KUNC, California Gov. Jerry Brown, who has asked the White House for a “major disaster declaration,” hit back at the president on Sunday during a news conference. He said forest management is only one element to preventing forest fires. 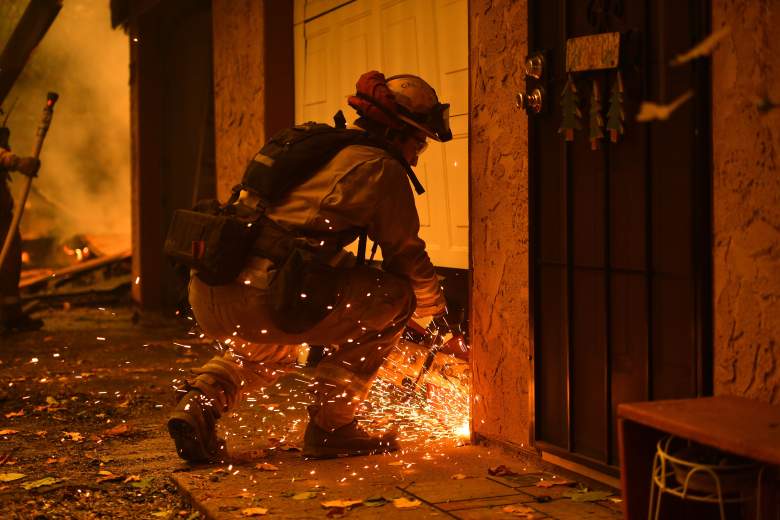 “Managing all the forests in every way we can does not stop climate change and those who deny that are definitely contributing to the tragedies that we are now witnessing and will continue to witness,” Brown said.

His comment also angered Harold Schaitberger, president of the International Association of Fire Fighters, who wrote: “His comments are reckless and insulting to the firefighters and people being affected.”

“The President’s message attacking California and threatening to withhold aid to the victims of the cataclysmic fires is ill-informed, ill-timed and demeaning to those who are suffering as well as the men and women on the front lines,” Brian K. Rice, president of California Professional Firefighters said. He also said that Trump’s assertion that California’s forest management policies are to blame “is dangerously wrong.”

“Wildfires are sparked and spread not only in forested areas but in populated areas and open fields fueled by parched vegetation, high winds, low humidity and geography,” he said.

Loading more stories
wpDiscuz
0
0
Would love your thoughts, please comment.x
()
x
| Reply
Why does California have so many wildfires? Scientists believe a combination of climate change, the Santa Ana winds and careless people are to blame.