In Game 1 on Friday, Carlsen and Caruana played for seven hours in an intense game that ended as a tie, giving each player half of a point.

The 2018 World Chess Championship is a 12-game marathon that runs from Nov. 8-28, based out of London. You can watch the match take place here, on Chess.com.

When asked if he feels like he’s the new Bobby Fischer, 26-year-old Caruana replied, “I think that the comparison is still early.” Here’s what you need to know:

1. Caruana Is the First American to Compete for the World Title Since Bobby Fischer Famously Won in the 70s

The Champions' Showdown is starting soon in St. Louis, where I'll be working hard to stop the Grinch from stealing Christmas

Caruana is often compared to U.S. chess legend Bobby Fischer, and —if he wins the championship over Carlsen— will be the first American to win since Fischer.

Caruana is used to the comparison, and finds it flattering. To The Guardian, he said, “I’d say the one player who has always blown me away and inspired me has been Bobby Fischer.”

Caruana added, “I mean some of the personal stuff was not great, but his approach to chess and his willpower was just phenomenal and was always an inspiration. We’re just so different in so many ways. It’s great to be compared in a historical context to Fischer, but in terms of our personalities and our playing styles and our approach to chess, we’re both very different.”

Caruana Goes by ‘Fabi’ & Grew up in Brooklyn, Though He Now Plays for Italy

Caruana was born in Miami but moved to the Park Slope neighborhood of Brooklyn as a young child, spending most of his formative years there. He learned to play chess at five years old in an after school program. Ironically, his mother signed him up for the program to help him learn how to keep his concentration better. He took to the sport quickly.

By age six, he was training with a renowned chess expert, Bruce Pandolfini, and he soon showed so much promise that his family pulled him out of school and moved to Spain, so that he could train with world-class instructors. Caruana’s father said to TIME, “His first instructor told us he was trying to teach her chess concepts. We knew he was special.”

Of the decision to take his son out of school, Caruana’s father further admitted, “It was not an easy decision. The plan was always to do it for a year or two and see how it works out. If he loses a year of school, so what? He’s smart and can catch up. We could always correct things if it wasn’t going in the right direction.”

Caruana said he still considers himself a New Yorker, in spite of the fact that he left when he was young. I haven’t been in New York for so many years,” he said, “but living there so long, especially as a kid, it kind of gets in your blood in a way. So I still consider myself a New Yorker. It’s the most unique city, just such a diverse and vibrant place, culturally and in terms of the energy of the city. I generally prefer quieter, slightly smaller cities, but it’s still the best place to visit, in my opinion.”

3. Caruana Uses Yoga as a Means of Alleviating Stress From His Matches

Caruana is adamant about treating chess like the sport that it is- both mentally and physically. As a result, he practices yoga to combat stress amongst all of his tournaments.

Caruana further added that he thought his competitor, Carlsen, was successful because he did take chess as seriously as other athletes. “Magnus, I think, does, and I think that’s part of the reason for his success,” Caruana said, “because not only his chess strength but also his physical form and his psychological conditioning is at the highest level and not at the same level that traditionally chess players have gone lengths to achieve.”

4. Caruana Is Now Based in St. Louis, Missouri, Which He Calls the ‘Best Place to Be’ for Chess

According to TIME, the city of St. Louis is a “budding epicenter of global chess,” largely because of the famous tournament the Sinquefield Cup, which is also connected to one of the world’s premier chess clubs in the city.

Caruana said to TIME, “For a chess player, it’s the best place to be.”

When training for a big match, Caruana plays up to eight hours a day. He said of his training, “The goal is get you thinking about chess 24/7 in preparation for the match. It’s playing quick games, slow games, anything that will get you in that mode where you calculate very quickly. Your mind is working in the best possible shape.”

5. Caruana Is up Against the ‘Mozart of Chess,’ Magnus Carlsen, Who Is Widely Considered to Be the Greatest of all Time 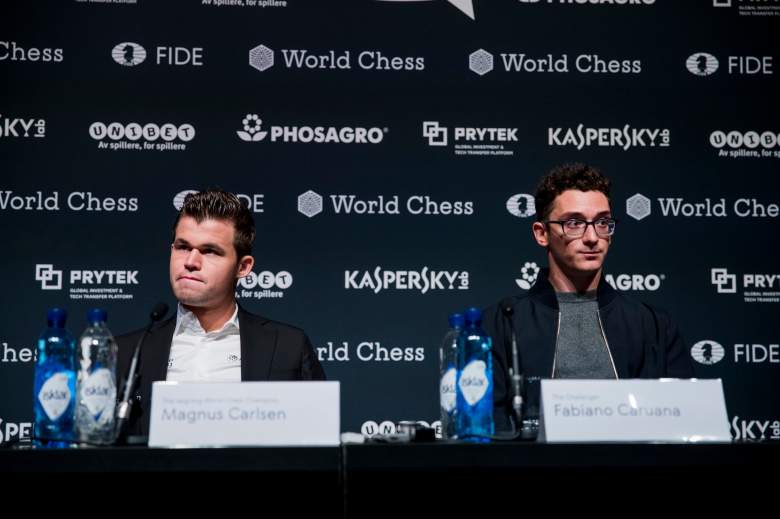 Caruana’s competitor, Magnus Carlsen, is the closest thing to a celebrity that the chess world has to offer. He is the reigning world champion, the youngest grandmaster in history, and has “no clear weaknesses,” according to Caruana.

In the press conference before Game 1, Caruana had this to say about Carlsen: “I don’t think that Magnus has any clear weaknesses. Usually the mistakes he makes are very individual and they don’t have a clear pattern to them, and I think this also goes for most of the players at the very, very top, but that being said, he still makes mistakes, we all do, and the only challenge is to be ready to take them when they come.”

As for Carlsen, when asked if he thought he was an underdog or a favorite in his championship tournament against Caruana, he gave an honest but flattering answer:

“If you’ve been the number one ranked player in the world for seven years and you’ve won three World Championships in a row, and you consider yourself an underdog, then there’s something seriously wrong with your psyche, I think. Having said that, obviously Fabiano is a tremendous player, his results this year speak for themselves and I know that if I continue to play in the same vein that I have been recently then I will probably not win, so I need to step it up, but I have great confidence in my powers to do exactly that.”

READ NEXT: Magnus Carlsen: 5 Fast Facts You Need to Know

Read More
5 Fast Facts
Follow Heavy ↓
Fabiano Caruana is an American chess player playing Magnus Carlsen in the World Championships. If he wins, he'll be the first American to do so since Bobby Fischer.