Stan Lee was a comic legend and he has passed away at the age of 95 years old, just about a year and a half after the death of his longtime wife, Joan B. Lee. TMZ has reported that Lee has been battling pneumonia and vision issues over the past year, but he was rushed to the hospital on Monday, November 12, 2018, where he died. The news was announced by Lee’s one living daughter, Joan Celia Lee.

When Stan Lee had met his late wife, she was already married. Joan B. Lee once told Nada Surf Tube that this was true, but she soon got divorced and went on to fall in love with Lee. Joan’s first husband was a man named Sanford Weiss, who she was married to from 1944 – 1947. At nearly the same time she divorced Weiss, she married Lee.

When Lee and his wife met, she was a model and an actress. The two met in New York City in the 1940’s when Joan was working as a hat model, according to The Hollywood Reporter.

Lee talked to The Hollywood Reporter, in 2016, about how he first got together with his wife, many years ago. He recalled, “When I was young, there was one girl I drew; one body and face and hair. It was my idea of what a girl should be. The perfect woman. And when I got out of the Army, somebody, a cousin of mine, knew a model, a hat model at a place called Laden Hats. He said, ‘Stan, there’s this really pretty girl named Betty. I think you’d like her. She might like you. Why don’t you go over and ask her to lunch.’ Blah, blah, blah.”

He continued, “So I went up to this place. Betty didn’t answer the door. But Joan answered, and she was the head model. I took one look at her — and she was the girl I had been drawing all my life. And then I heard the English accent. And I’m a nut for English accents! She said, ‘May I help you?’ And I took a look at her, and I think I said something crazy like, ‘I love you.’ I don’t remember exactly. But anyway, I took her to lunch. I never met Betty, the other girl. I think I proposed to [Joan] at lunch.”

Over the years, Lee has included his wife in several of his projects, including X-Men: Apocalypse, Spider-Man and Fantastic Four. The couple was married for 69 years, until Joan’s death and Lee called her “the perfect wife”. According to ABC News, in 2011, Lee joked that, “My wife and I are really so close. And yet, I’m not sure if she’s ever read a story I wrote. She’s totally not into comics at all … She’s the perfect wife for me.” 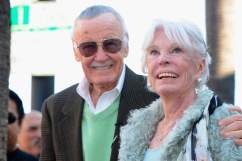 Joan B. Lee died in July 2017. Leading up to her death, she suffered a stroke and was hospitalized, according to The Hollywood Reporter. A rep for the family released the following message upon her death, “I can confirm the sad news that Joan Lee passed away this morning quietly and surrounded by her family. The family ask that you please give them time to grieve and respect their privacy during this difficult time.”

Read More
Stan Lee
Stan Lee has died. He was married to his wife Joan B. Lee for many years and she passed away one year prior to the comic legend's death.