Kemia Nekenah Hassel is charged with first-degree premeditated murder in the shooting death of her husband, soldier Tyrone Hassel III. Sergeant Hassel, 23, was shot and killed shortly before midnight on December 31, 2018, in St. Joseph, Michigan.

Berrien County Prosecuting Attorney Michael Sepic confirmed to Heavy that Kemia is accused of having an extramarital affair with the second suspect, identified as Jeremy Cuellar, 24. Cuellar is the one accused of pulling the trigger.

The prosecutor revealed in a news release that the two are accused of plotting Tyrone Hassel’s death in order to “continue their relationship and reap the Army’s death benefit from his murder.” Kemia was arrested January 12 in Michigan. Cuellar was taken into custody in Liberty County, Georgia, and will be extradited to Michigan.

1. Tyrone Hassel Was Shot Outside His Father’s House; He Was Home in Michigan Visiting Family for the Holidays

Tyrone Hassel III, 23, was an active-duty sergeant stationed in Fort Stewart in Georgia. His father, Tyrone Hassel Jr., wrote on a GoFundMe page that his son had recently returned home from a tour in South Korea.

He returned to his hometown in Berrien County, Michigan for the holidays. Hassel’s father says he left a family party on New Year’s Eve to deliver a plate of food to his wife and baby son. Prosecutors say Hassel was ambushed by a gunman, now identified as Jeremy Cuellar, outside his father’s house as he was walking back to his pickup truck around 11 p.m.

Hassel III was rushed to a hospital, where he was pronounced dead. The elder Tyrone Hassel wrote that his son “died in the arms of his wife who is also an active duty U.S. Army Soldier.”

According to his father, Hassel III graduated high school in Benton Harbor, Michigan, “at the top of his class.” He earned a scholarship to Grand Valley State University. He enlisted in the army during his sophomore year of college. The obituary states that he earned the Army Achievement Medal and the German Army Proficiency Badge, and was promoted to sergeant on Oct. 31, 2017.

The GoFundMe page was originally launched by the family to raise money for a reward for information about their son’s death. 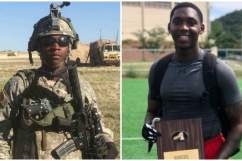 2. Kemia Nekenah Hassel & Jeremy Cuellar Are Both Charged With First-Degree Premeditated Murder; Prosecutors Say the They Were Having an Affair & Plotted Together to Kill Tyrone Hassel

Kemia Nekenah Hassel was arrested on Saturday, January 12. According to inmate records, she just turned 22 years old. Jeremy Cuellar was arrested in Georgia.

Both are charged with First-Degree Premeditated Murder, which carries a potential sentence of life in prison without the possibility of parole. Her bond was set at $2.5 million. Cuellar faces an additional charge of Felony Firearm.

Prosecutor Michael Sepic released the following details as to the alleged motive:

“It is alleged that Kemia Hassel and Jeremy Cuellar, also an active duty US Army soldier stationed at Fort Stewart, were in an extramarital relationship and plotted to kill Kemia’s husband, Tyrone. Further, it is alleged Cuellar travelled from Fort Stewart to Chicago several days prior to December 31, waited for directions from Kemia Hassel to ambush Tyrone, and did so finally on New Year’s Eve. The motive for the two to plot Sgt. Hassel’s death may have been to continue their relationship and reap the Army’s death benefit from his murder.”

Prosecutors said Hassel III had a $100,000 life insurance policy, and that it was paid out to his wife prior to her arrest.

3. The Elder Tyrone Hassel Says He Believes His Daughter-In-Law Kemia is Guilty of Plotting to Murder His Son

The family of Tyrone Hassel III is demanding answers about why their son was gunned down. His father, Tyrone Hassel Jr, said he believes his daughter-in-law planned the murder.

Hassel Jr. told local CBS affiliate WWMT-TV that he has placed the blame on Kemia Nekenah Hassel. “It was planned out. It was. Basically, my son was assassinated.”

Following the filing of the charges, Hassel Jr told WSB-TV that he had felt stunned by Kemia’s alleged actions aftet they came to light. “I spent two weeks with this person, after she killed my son… I grieved for her more than I grieved for myself. Because I saw a woman that lost her husband. I look at my grandson and I saw a kid that lost his father… She deceived us all.”

4. Kemia Nekenah Hassel & Tyrone Hassel III Met in the Army & Have One Son

Kemia Nekenah Hassel & Tyrone Hassel III got married May 17, 2017. According to his obituary, they met in the service. Kemia Hassel is a Specialist in the Army.

The couple was living in Hinesville, Georgia, near Fort Stewart. According to her Facebook page, Kemia is originally from Miami, Florida, but attended high school in Riverdale, Georgia.

They have one son together, named Tyrone Hassel IV.

Kemia Nekenah Hassel was very active on social media after her husband was shot and killed. She posted multiple messages about how much she loved Tyrone, including one post in which she said she would never remove her wedding ring. On January 5, she shared the photo above, which she said was taken while she was pregnant with their son. The caption read, “Idk If Y’all Can Tell But I Was Big And Pregnant ?. My Baby Loved Me. I Owe You Another Baby ? We Needed A Girl ?.”

On January 4, Kemia suggested that she felt guilt over Tyrone’s murder, writing, “I Just Wish I Was Dreaming Man. Im Trying Not To Blame Myself But F*ck ??‍♀️???‍♀️???‍♀️? #RIPToMyBaby.”

In the days leading up to her arrest, Kemia expressed resentment about people questioning what had happened to Tyrone. On January 9, she wrote in all caps, “YALL LAME ASS FOLKS GET OUT MY INBOX TALKIN BOUT ‘OMG WHAT HAPPENED TO BRO? HE WAS SO COOL’ MY HUSBAND WAS NOT YALL N*GGAS F*CKIN BRO. GET TF OUT MY INBOX WITH THE CAP.”