John Walker Lindh, 38, known as the “American Taliban,” was released from federal prison early in the morning on Thursday, May 23, 2019, according to federal inmate records. His lawyer also confirmed to the Washington Post that Lindh had left the federal correctional institution in Terre Haute, Indiana.

Lindh has spent the past 17 years behind bars after pleading guilty in 2002 to charges related to his time spent fighting alongside the Taliban and al Qaeda in Afghanistan and Pakistan. He was released three years early for good behavior.

Lindh will be on probation for the next three years. He surrendered his passport, is banned from using any language other than English online and has restrictive software installed on his devices. He also must undergo counseling. Lindh obtained Irish citizenship while behind bars but is not permitted to leave the United States while on probation.

John Walker Lindh was the son of a Catholic father and a mother who practiced Buddhism. But he says he became interested in Islam at the age of 12 after watching a documentary about Malcolm X.

Lindh told FBI investigators after his arrest that he converted to Islam at age 16 and began attending religious services in his northern California community. He adopted the nicknames Suleyman al-Lindh and Suleyman al-Faris.

Lindh’s first trip to the Middle East was in 1999. He took a trip to Yemen because he wanted to learn to speak Arabic. He briefly came back home to California before heading to Pakistan in October of 2000. He attended a fundamentalist Islamic school, joined an extremist Islamic group and received military training. Lindh told investigators that he became disenchanted with that group, which was focused on the fight in Kashmir between Pakistani and Indian groups.

His next move was to join the Taliban, but he was assigned to train with al Qaeda because of his Arabic skills. According to FBI documents cited by CNN at the time of his arrest, Lindh spent seven weeks at an al Qaeda training camp called al Farooq beginning in June of 2001. The training included “weapons familiarization, one week to studying maps/topography, one to battlefield training, and one to explosives,” as explained by the Counter Extremism Project.

He said it was there that he and a few others met Osama Bin Laden, who thanked the fighters for their service. Lindh told the FBI that he swore allegiance to the jihadi cause during his training.

2. Lindh Was Arrested by Western Forces in November of 2001 & Extradited to the United States in January of 2002

John Walker Lindh was fighting alongside Taliban forces in Afghanistan, against the Northern Alliance, on September 11, 2001. He told interrogators he feared for his life following the American invasion of Afghanistan.

He and other fighters walked 100 miles to the city of Kunduz. Lindh and about 3,000 other fighters were arrested in November of 2001 and taken to the Mazar-e Sharif prison.

GettyAmerican Taliban John Walker Lindh is shown in this undated photo bound to a stretcher after his capture by U.S. troops at Camp Rhino in Khandahar, Afghanistan.

On November 25, 2001, a deadly uprising occurred at the prison. A CIA agent, Johnny Micheal Spann, who had also interrogated Lindh at the prison, was killed in the riot. Lindh was injured and later insisted during his trial that he had not been involved in Spann’s murder.

Lindh was handed over to U.S. forces in December of 2001, according to the Counter Extremism Project. He was held in Afghanistan for another two weeks before interrogators moved him to the Navy ship USS Peleliu. Lindh was extradited to the United States in early 2002 to face charges.

3. John Walker Lindh Faced Charges Including Conspiracy to Kill Americans But Agreed to Plead Guilty to Lesser Charges in Exchange For a Shorter Prison Sentence

John Walker Lindh could have spent the rest of his life behind bars or faced the death penalty. A grand jury indicted him on ten charges:

But Lindh and his legal team negotiated for a much lighter sentence and far fewer charges, in exchange for his cooperation. Lindh pleaded guilty in July of 2002 to Supplying services to the Taliban and Using, carrying and possessing firearms and destructive devices during crimes of violence.

GettyTaliban fighter John Walker Lindh (2nd-L) rides in the back seat with security officers 23 January, 2002, as they arrive at the Alexandria Detention Center in Alexandria, Virginia.

As part of the plea deal, Lindh also agreed to drop his claim that he had been tortured during his detention in Afghanistan. The deal further stipulated that neither Lindh nor his family could ever earn money by sharing his story, such as in a movie or book deal.

Lindh was formally sentenced to 20 years in prison on October 5, 2002. In a statement to the court, Lindh explained that he had been unaware of the Taliban’s true intentions and expressed regret for his action. The New York Times published excerpts of his statement from that day, which included: “I made a mistake by joining the Taliban… I want the court to know, and I want the American people to know, that had I realized then what I know now about the Taliban, I would never have joined them… I went to Afghanistan because I believed there was no way to alleviate the suffering of the Afghan people aside from military action. I did not go to fight against America, and I never did.”

The judge who handed down the sentence was Judge T. S. Ellis III of Federal District Court.

Lindh was also named as a defendant in two separate lawsuits filed in the District Of Columbia District Court and the Illinois Northern District Court. The plaintiffs listed in the suit demanded compensatory and punitive damages from multiple defendants.

4. Lindh And His Attorneys Appealed For a Shorter Sentence By Citing Examples of Other Taliban Fighters Who Had Been Freed

The Lindh family has argued at least twice that their son should have been released from prison far sooner. In 2007, Lindh appealed his sentence on the basis that other fighters had received lesser sentences than he had.

His lawyers pointed to the example of Yaser Hamdi, a dual citizen of the United States and Saudi Arabia. He was born in Louisiana and also joined the Taliban. But he was never charged in the U.S. courts because he was held as an enemy combatant. The Supreme Court eventually ruled that he should be released. Hamdi was transferred to Saudi Arabia in 2004 in exchange for agreeing to limited travel and surrendered his U.S. citizenship. If he had violated the agreement, he would have faced legal trouble under Saudi Arabian laws, not U.S. laws.

Lindh’s attorneys also cited the example of David Hicks, an Australian citizen detained at Guantanamo Bay. As explained by the BBC, Hicks was detained for five years after he was arrested while fighting with the Taliban in Afghanistan. But after pleading guilty to supporting terrorism, a judge ruled that Hicks would serve only another nine months behind bars and be sent back to Australia.

Lindh’s father, Frank Lindh, wrote an editorial for the New York Times in May of 2011, shortly after U.S. forces killed Osama bin Laden in Pakistan. Mr. Lindh argued that since Lindh had not been convicted for terrorism or treason, that he should be allowed to return home.

He wrote in part, “John was a scapegoat, wrongly accused of terrorism at a moment when our grieving country needed someone to blame because the real terrorist had gotten away. Now that Bin Laden is dead, I hope President Obama, and the American people, can find it in their hearts to release John, and let him come home. Ten years is enough.”

5. John Walker Lindh Grew Up in Northern California But Will Likely Move to Ireland Following His Release From Prison

John Walker Lindh was born on February 9, 1981, in Washington, D.C. But the family moved to Marin County, California, near San Francisco, when Lindh was ten. He attended Tamiscal High School and has two siblings. He had no criminal history prior to his decision to go overseas and join the Taliban.

Lindh’s family was aware when he traveled to Yemen to study Arabic. But his father, Frank Lindh, told CNN after he was arrested that the family had not known that Lindh had traveled to Afghanistan or joined the Taliban. A family friend named Bill Jones told the network that the family learned what Lindh had been by viewing a report on CNN. Jones said Lindh’s parents “were very, very upset and very confused because what they saw on CNN was frightening. They hadn’t seen or heard from him in seven months, and they were desperate. … They tried to get a hold of him. They couldn’t, and so to see him lying on the hospital floor with his blackened face and his eyes rolling into his skull really frightened them.”

Lindh will likely not return to northern California after he is released from federal prison. Fox News reported that Lindh obtained Irish citizenship while behind bars through his paternal grandmother. 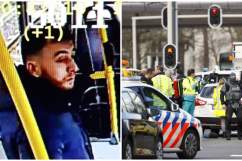