Staff Sergeant Travis Atkins, who was killed in action in Iraq while saving the lives of his fellow soldiers, was posthumously awarded the Medal of Honor by President Donald Trump during a special ceremony at the White House on March 27, 2019.

Atkins’ son, Trevor Oliver, accepted the award on his father’s behalf. Atkins’ parents, Jack and Elaine, were also present for the ceremony. You can watch the ceremony below.

Atkins was on his second deployment to Iraq in 2007 when he heroically pinned a suicide bomber to the ground, which saved the lives of three other soldiers. Atkins was 31 years old.

1. Army: Atkins & His Team Were Searching For a Missing Soldier on June 1, 2007, When They Encountered an Insurgent Wearing a Suicide Vest; Atkins Sacrificed Himself By Tackling the Bomber

Do you know the incredible story of Staff Sgt. Travis Atkins?

This American hero will be awarded the #MedalOfHonor on March 27 for his valor and courageous actions serving with the @10MTNDIV during Operation Iraqi Freedom.

Staff Sergeant Travis Atkins and three other soldiers went looking for a captured comrade on June 1, 2007, near the Iraqi town of Yusufiyah. According to the U.S. Army, soldiers referred to the area as the “Triangle of Death” due to the number of fatalities in the region since 2003.

Atkins and his crew noticed four Iraqi men whom they believed looked suspicious. Atkins instructed the Humvee driver to pull up so they could search the men for weapons. But the confrontation quickly escalated and Atkins ended up in a physical fight with one of the men who did not want to allow Atkins to search him.

U.S. Army photo by Spc. Chris McCannSoldiers kneel to pay their respects to Staff Sgt. Travis Atkins, who was killed, June 1, 2007, by a suicide bomber near Sadr Al-Yusufiyah, Iraq, at a memorial ceremony held June 7, 2007 at Camp Striker

The man turned out to be wearing a suicide vest and reached for it. Seeing this movement, Atkins tackled the man to the ground, effectively shielding the other three U.S. soldiers from danger when the explosive went off. One of the other soldiers from Atkins’ truck shot and killed a second insurgent who appeared to also be wearing a suicide vest. Atkins was awarded the Distinguished Service Cross for his sacrifice.

Spc. Travis Robertshaw, who was one of the men Atkins saved that day, described Atkins in an Army article. “I remember him as being very intense. He loved the Army. He loved his country. He was very passionate about the Army and always wanted to make sure the job got done well. But at the same time when we weren’t doing Soldier tasks and sitting around waiting, he’d like to joke around, tell stories and just talk to us.”

2. Travis Atkins Was a Highly Decorated Solider & a Facility at Fort Drum in New York Was Named For Him in 2013

Staff Sergeant Travis Atkins has a long list of commendations to his name. His honors include:

Atkins also has a facility named in his honor at Fort Drum in New York. In 2013, the Atkins Functional Fitness Facility was dedicated to him. Sgt. Aaron Hall spoke of Atkins at the ceremony. “Travis always personalized the term ‘quiet professional,’ and because of this, he was always respected by all subordinates, peers and supervisors alike. He was a leader in the truest sense of the word.”

3. Atkins’ Son: ‘I Want Him to be Remembered as the Best Father That Anyone Could Ask For’

Jack Atkins, Travis’ father, recalled his son always had a fascination with the Army. His mother, Elaine, described how Travis talked about how much fun he had during basic training. She said there would always be a “void” in their family from the loss of Travis.

Staff Sergeant Travis Atkins and his parents, Elaine and Jack

Jack Atkins said Travis always understood the inherent risk involved in joining the Army and deploying to the Middle East. “Travis knew the reality of serving in Iraq. He knew the danger.” Trevor echoed that sentiment, adding that Travis didn’t like to talk about that part of the job but would explain to him that there were “bad guys who don’t like me very much.”

Trevor said he tries to focus on the positive and the fact that his father was a hero. “My dad’s gone and that’s hard. But, it’s the fact that, what he did is so extreme and that just moves me even more. He was my icon.” Trevor added that the Medal of Honor “means the world” to him and his family. “He did truly deserve it. My true treasure is what people say about him. And that’s what makes me the most proud. He was a great soldier and a great father.”

4. Travis Atkins Enlisted in the Army Twice; a Recruiter Recommended He Become a Helicopter Mechanic But Atkins Insisted on Joining the Infantry

Travis Atkins as a child

Travis Atkins’ father, Jack, said Trevor had always been fascinated with the idea of joining the Army. Jack said that as a child, Travis liked to enlist his younger sister into playing “Army” along with their collection of plastic soldiers. Jack served in Vietnam but said Travis developed his interest in the Army on his own.

Atkins first enlisted in the Army on November 9, 2000, a few weeks before his 25th birthday. His father explained that a recruiter thought Atkins would be best suited as a helicopter mechanic but Atkins wanted to be part of the infantry. He went to basic training at Fort Benning in Georgia and was then assigned to “Alpha Company, 3rd Battalion, 327th Infantry Regiment, 1st Brigade, 101st Airborne Division” in Kentucky. Atkins participated in the invasion of Iraq in 2003 and served as an “infantry fire team leader,” according to the U.S. Army website.

Atkins received an honorable discharge in December of 2003. But after a couple of years of civilian life, Atkins missed the Army and decided to go back. He re-enlisted in December of 2005 and was based at Fort Drum in New York.

Atkins received orders for another deployment to Iraq in August of 2016. He was promoted to Staff Sergeant on May 1, 2007. Atkins spoke to his mother on the phone shortly before heading out on his final mission. Their conversation centered around whether she had received the Mother’s Day card he had mailed to her.

Travis Atkins was born on December 9, 1975. He spent the majority of his childhood in Bozeman, Montana. The Bozeman Schools Foundation established a scholarship in his name, which is awarded to a Bozeman High School student each year.

According to his obituary, Atkins loved to spend as much time outside as he could. He enjoyed hunting, fishing, camping, and riding on his snowmobile. The obituary added, “As much as he loved the outdoors, Travis’ first love was for his 11-year-old, Trevor. He cherished the time he could spend with Trevor and included Trevor in all of his outdoor activities.” The obituary does not mention Trevor’s mother.

After graduating from high school, Atkins worked as a small-engine mechanic. He attended the University of Montana after he was discharged from the Army in late 2003 and worked as a concrete and painting contractor. 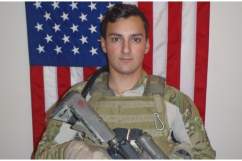 Leandro Jasso: A Tribute to a Fallen U.S. Soldier