Update: Lauryn Sizemore was recovered safely in Orange Beach, Alabama on April 3. Glenn Harper was arrested. Her mother wrote on Facebook, “Brian Sizemore and I would like to thank everyone for everything they have done for us during our search for Lauryn. As we now start a new chapter we ask that everyone please give us our space and allow us to help our daughter to heal. Everyone’s questions will be answered in due time. Thank you and Love you all!”

Lauryn Sizemore, 16, has been missing from her home in Dawson Springs, Kentucky since March 30 and police have issued an Ambert Alert as they search for the teen.

Police believe she is with her stepgrandfather, identified as Glenn Eugene Harper, 55. They may have driven toward Texas, where Harper has relatives.

1. Lauryn Sizemore Disappeared From Her Bedroom on March 30

Lauryn Sizemore was last seen in her bedroom in Dawson Springs, Kentucky on the evening of March 30, 2019. Dawson Springs is a small city located about 100 miles northwest of Nashville. The Amber Alert was issued on April 2.

Sizemore is 16 years old. She is 4 feet 8 inches tall and about 130 pounds. She has brown hair and hazel eyes. She was last seen wearing a gray hoodie with black strings. Police added that potential witnesses can also identify Sizemore by her lazy eye.

The Amber Alert was added to the National Center for Missing and Exploited Children website. According to the family, the FBI is not involved in the case at this point.

2. Glenn Harper Had Been Told to Stay Away From His Grandchildren, According to the Family

Lauryn Sizemore’s mother, Vanessa Harper-Sizemore, confirmed in a Facebook post that Glenn Harper is her father. She urged anyone who has seen Lauryn and Glenn to immediately call the police.

Vanessa shared that updates on the case would be posted in a new group called “Bring Lauryn Home Safe.” On that page, the family wrote that Glenn Harper was “previously told to stay away from the kids.” In the comments, the administrator of the page shared that the Amber Alert was not immediately sent out because it did not appear that Lauryn was taken by force.

Commenters speculated as to why Harper had been prohibited from going near children in the family. People asked whether he was ever accused of sexual abuse or anything of that nature, but neither police nor the family has commented on that. We reached out to the Dawson Springs Police Chief Jonathan Sholar for more information and will update this post when we hear back.

3. Police: Sizemore & Harper Are Believed to be Traveling in a Maroon Hyundai Sonata & May Have Headed to Texas

Lauryn Sizemore and Glenn Harper are believed to be traveling in a 2004 maroon Hyundai Sonata. It has a temporary Kentucky tag. The license plate number is 9555994. The Amber Alert added that one of the back doors has a “black plastic piece missing.”

Police believe Harper may have driven to Texas because his brother and father live in the Houston area. He also reportedly told a friend that he had plans to travel to Texas.

4. Police Waited to Issue an Amber Alert Because Lauryn Sizemore Did Not Appear to Have Been Taken by Force, According to the Family

Lauryn Sizemore has been missing since March 30 but the Kentucky State Police did not issue an Amber Alert until April 2. The family wrote on the “Bring Lauryn Home Safe” page that officials did not initially send out the alert because the evidence suggested that Sizemore had willingly left.

The Dawson Springs Police addressed the delay via social media on April 2. The post read, “When this case first came in on the 30th of March, it did not meet the criteria for Kentucky state Police to issue an Amber Alert. Amber is very specific on its criteria and the case fell short from meeting it. Late last night some new evidence came in about the case that has helped in now meeting the Amber criteria. That is the reason for the delay in the Amber Alert being issued. The Dawson Springs Police along with Kentucky State Police and several other agencies are working long hours in bringing closure to this case and get Lauryn home safe.”

According to the National Center for Missing and Exploited Children, cases typically meet the following criteria to qualify for an Amber Alert:

• There is reasonable belief by law enforcement that an abduction has occurred.
• The law enforcement agency believes that the child is in imminent danger of serious bodily injury or death.
• There is enough descriptive information about the victim and the abduction for law enforcement to issue an AMBER Alert to assist in the recovery of the child.
• The abduction is of a child aged 17 years or younger.
• The child’s name and other critical data elements, including the Child Abduction flag, have been entered into the National Crime Information Center (NCIC) system.

A prayer vigil was scheduled for Wednesday, April 3, at Dawson Springs High School. The 6 p.m. service turned into a celebration after police announced that Lauryn Sizemore had been found safe in Alabama. 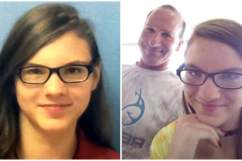