Pete Buttigieg has raised more than $7 million in the first two months of his presidential campaign. The mayor of South Bend revealed the preliminary number early in the morning on April 1, 2019, on social media.

He wrote on Twitter, “We (you) are out-performing expectations at every turn. I’ll have a more complete analysis later, but until then: a big thank you to all our supporters.”

This is just a preliminary analysis, but our team’s initial report shows we raised over $7 million dollars in Q1 of this year. We (you) are out-performing expectations at every turn. I'll have a more complete analysis later, but until then: a big thank you to all our supporters. pic.twitter.com/rDmTEiTfCs

The Federal Election Commission mandates that presidential candidates file quarterly financial reports. The filing deadline for the first quarter was April 15, 2019, with the books closing March 31, 2019. Buttigieg’s initial fundraising numbers include all donations made since launching the exploratory committee on January 23, 2019.

Pete Buttigieg Received Funds From More Than 158,000 Donors With an Average Donation of $36.35

As promised, here’s a more complete breakdown our Q1 fundraising metrics, including number of donors (158,550), average donation ($36.35), and the percent of our total raised that came in through contributions under $200 (64%) — second half of video to follow. #PeteforAmerica pic.twitter.com/41gedmRiNW

And here's the second half of my analysis of our Q1 fundraising metrics. (Can never have too much data, right?) pic.twitter.com/kh0eMURytO

Pete Buttigieg again took to Twitter to do a more thorough breakdown of his donation numbers. He shared that his campaign had received funds from a total of 158,550 people. The average donation was $36.35. 64 percent of the donations made to the campaign were from individuals who sent in $200 or less.

Buttigieg stated in the video that the $7 million figure was much higher than his campaign had originally set out to earn and “definitely ahead of what people thought we would be able to do.”

The Buttigieg campaign said that it would release more detailed information once the team had time to analyze all of the data. This post will be updated when those numbers are made public with the Federal Election Commission.

The Democratic National Committee Decided That Candidates Needed Donations From at Least 65,000 Unique Donors And/Or Reach a Certain Percentage in the Polls to Qualify for the First Primary Debates

WATCH: @TomPerez joined @maddow to discuss the first two Democratic presidential primary debates and how the Democratic Party is giving grassroots supporters a bigger voice in the primary than ever before. https://t.co/re8QmOdZd2

The Democratic National Committee announced specific criteria for presidential candidates to qualify for the primary debates on February 14, 2019. One of the possible entry points had to do with the number of campaign donations. The DNC stipulated that “Candidates may qualify for the debate by demonstrating that the campaign has received donations from at least (1) 65,000 unique donors; and (2) a minimum of 200 unique donors per state in at least 20 U.S. states.”

The other route to the primary debates was to perform well in polls. Candidates needed to “Register 1% or more support in three polls (which may be national polls, or polls in Iowa, New Hampshire, South Carolina, and/or Nevada) publicly released between January 1, 2019, and 14 days prior to the date of the Organization Debate.”

Pete Buttigieg had experience with fundraising prior to starting a presidential campaign. He created a political action committee in 2017 to assist Democratic candidates. His PAC, called “Hitting Home,” was created as a “Carey Committee.” According to the Center for Responsive Politics, a Carey committee is a “hybrid political action committee that is not affiliated with a candidate and has the ability to operate both as a traditional PAC, contributing funds to a candidate’s committee, and as a super PAC, which makes independent expenditures.”

The PAC raised a total of $403,503 in 2018. The organization gave $36,000 to various Democratic candidates running for the House, including Rep. Sharice Davids of Kansas, Rep. Lauren Underwood of Illinois, and Rep. Dave Loebsack of Iowa. The PAC also gave $1,000 to the re-election campaign for Senator Joe Donnelly of Indiana, who lost in 2018.

The majority of the PAC’s expenditures were used to pay salaries and for administrative costs. $77,500 went toward strategy and communications consulting. 90 donors contributed funds larger than $200 to the PAC before the end of the reporting year in 2018. The treasurer of the PAC is Michael Schmuhl, Buttigieg’s campaign manager.

The Federal Election Commission keeps close track of how much money presidential candidates raise and where that money is allocated. The first quarter’s books closed on March 31, 2019, and candidates had until April 15, 2019, to officially file the financial report with the FEC. You can see the full filing schedule here.

Pete Buttigieg launched his exploratory committee for president in January. He officially filed his “Statement of Candidacy” with the FEC on February 22, 2019. 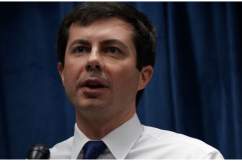