Four days after she called 911 to claim that her daughter was almost kidnapped by a man inside an Old Navy at the Huntington Mall, and only stopped when she pulled a gun on him, has been arrested and charged with filing a false emergency report.

Santana Renee Adams, 24, pointed out Mohamed Fathy Hussein Zayan,56, an engineer from Egypt as the alleged abductor. She said he yanked her child’s hair in an attempt to abduct her. She said she pulled her handgun out and he took off. When police arrived she had a gun in her pocket. He was arrested, charged and jailed. And only after police began digging, after they charged the 56-year-old man visiting the US, did Adams confess that she’d made the story up and recanted.

And days later, police admitted that Zayan was never even near Adams and her 5-year-old daughter, the latter who’d gone along with her mother’s story, police said.

Only after a deafening public outcry, and after dropping all charges against Zayan, was Adams finally arrested and charged. 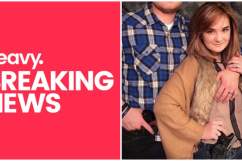 In a video from WCHS and WVAH news, Adams is seen in custody and then in the Cabell County Courthouse where she was arraigned Friday afternoon.

Read More
Breaking News, Crime
Follow Heavy ↓
Santana Renee Adams pulled a gun on a Egyptian man who was trying to abduct her daughter. It was a lie. The man was arrested and charged. She was not charged until Friday.