The case of Timmothy Pitzen, who vanished in 2011 when he was 6 years old from Aurora, Illinois, remains unsolved. A person found walking by himself early in the morning on April 3, 2019, in Newport, Kentucky claimed that he was Timmothy Pitzen and that he had been kidnapped.

But a DNA test conducted by the FBI determined that the person is not the same child who vanished nearly eight years ago.

The Newport, Kentucky Police Department, has identified the person who claimed to be Timmothy Pitzen as a 24-year-old man named Brian Michael Rini, according to FOX Illinois.

Rini, who had claimed to be 14 years old, told officers with the Sharonville Police Department that he had been held by two white men for the past 7 years. He said they had been staying at a Red Roof Inn somewhere nearby, but he was not sure which one. He escaped and ran across a bridge that connects Cincinnati with northern Kentucky.

According to the police report, the person described the two men as having “body-builder type” builds. “One had black curly hair, Mt. Dew shirt and jeans, & has a spider web tattoo on his neck. The other was short in stature and had a snake tattoo on his arms.”

The FBI Louisville office shared on social media, “A local investigation continues into this person’s true identity. To be clear, law enforcement has not and will not forget Timmothy, and we hope to one day reunite him with his family. Unfortunately, that day will not be today.APD continues to lead the investigation into the Timmothy’s disappearance. The FBI will support this investigation in any way possible. Anyone with genuine information about the case is asked to call the APD at 630-256-5000 or the NCMEC at 1-800-THE-LOST (1-800-843-5678).”

Timmothy Pitzen’s aunt, Kara Jacobs, spoke out minutes after the FBI revealed the DNA results. She said she was “reserving judgment” and “praying for the young man involved.” She said that Timmothy’s father is “devastated once again.” Timmothy’s grandmother added that she felt “sorry” for the “young man” who felt the need to claim that he was Timmothy.

1. Timmothy Pitzen & His Mother Were Reported Missing After She Took Him Out of School in 2011; She Later Died by Suicide in an Illinois Hotel

The Timmothy Pitzen case began on May 11, 2011. Surveillance video showed Timmothy’s mother, Amy Pitzen, picked him up from Greenman Elementary School in Aurora, which is an outer suburb of Chicago. But they never made it home that day. Jim Pitzen, Timmothy’s father, called the police to report that his wife and son were missing.

The National Center for Missing and Exploited Children explained that Amy Pitzen drove her son more than 500 miles over the next two days. Their stops included an amusement park and a zoo. They traveled north into Wisconsin before turning around and coming back to Illinois. The last time they both were seen on camera was at 10:10 in the morning on May 13, 2011. They were recorded on a surveillance camera while checking out of a resort in Wisconsin.

Amy Pitzen showed up on camera again later that day in Winnebago, Illinois, at a grocery store. But Timmothy was not with her. She later checked into a hotel in Rockford, Illinois, which is about 70 miles northwest of Aurora. The following morning, a hotel worker found Amy dead in the room. She had died by suicide. Timmothy was not there.

2. Amy Pitzen Left a Note Stating That Timmothy Was Safe But That He Would Never Be Found; His Aunt Says She Has Always Believed Timmothy is Still Alive

Timmothy Pitzen’s aunt, Karen Jacobs, explained to the National Center for Missing and Exploited Children in 2018 that she does not believe Amy would have ever hurt Timmothy. She also stated that she has always firmly believed that her nephew is out there and alive. Jacobs added that Amy had a history of depression and that the marriage had been strained.

Amy Pitzen left behind a note in the hotel room, according to investigators. The letter stated that her son Timmothy was safe and being cared for by someone who loved him. But she also wrote that Timmothy was not going to be found.

Timmothy Pitzen and his parents, Jim and Amy

Lee Catavu of the Aurora Police Department spoke with CNN for the show “The Hunt with John Walsh” in 2015. He told the network that it was possible Amy Pitzen could left her son with another family at some point on May 13. Catavu explained that the area between where Timmothy was last seen on surveillance camera in Wisconsin, to where his mother was later seen in Winnebago, is mainly farmland. “Any one of those locations could, in theory, be a spot where she could have done a hand-off of her child to someone.”

3. James Pitzen, Timmothy’s Father, Said the Lasts Words He Said to Timmothy Before He Disappeared Were, ‘I Love You’

James Pitzen, Timmothy’s father, has never stopped looking for his missing son. His Facebook page is devoted exclusively to the search. He has continued to post old pictures of Timmothy and “missing child” posters.

Pitzen spoke with WTVO-TV in 2017 about dropping off Timmothy at kindergarten on May 11, 2011. He said that Timmothy jumped out of the Jeep, excited for school, and said, “Love you, Dad!” Pitzen responded, “Love you, too!” Pitzen returned later that day to pick up his son, only to learn that Timmothy’s mother, Amy, had picked him up hours earlier, around 8:30 a.m. Pitzen stated that he does not believe his wife would have harmed Timmothy.

The only personal information listed on Pitzen’s Facebook page is that he is currently living in his hometown of Clinton, Iowa. An online search of records indicates he moved back there from Aurora a few months after his wife died by suicide and his son disappeared.

4. Timmothy Pitzen Was Featured on an Amazon Show Called ‘Fireball Run’ in January of 2019

The case of Timmothy Pitzen garnered some fresh attention at the beginning of 2019. His story was featured on “Fireball Run,” an adventure series on Amazon. Dozens of teams participate in a multi-city scavenger hunt and race that spans more than 2,000 miles. They have to complete specific challenges at each town they stop in.

The main goal of the show is to showcase missing children and spread awareness. Each team was assigned a missing child, whose picture was plastered on the side of the vehicle. Each team is also responsible for passing out flyers about the child and sharing information to as many people as possible.

The show posted on Facebook on April 3 after hearing that Timmothy Pitzen may have been found. They wrote, “The production just received a call from Cincinnati media. A missing child featured in Amazon’s #FireballRun Season 11 may have been found after 7 years in Kentucky… Although this has yet to be confirmed it is very exciting and we hope for the best.”

5. Timmothy Pitzen Would Be 14 Years Old Today & the National Center For Missing & Exploited Children Created an Image of What He Might Look Like

Timmothy Pitzen was born on October 18, 2004. Amy Pitzen’s mother, Alana Anderson, told CNN that it was Amy’s idea to add thr extra “m” to his name in order to give his name a more unique quality. 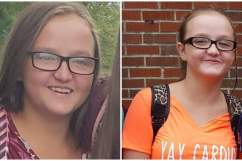