The first of the Democratic debates is tonight, Wednesday, June 26, 2019, in Miami. What time is the debate starting and how can you watch it on TV? Here’s a quick look at when you’ll need to tune in for the debate.

If you are looking for details about the July 30, 2019 debate in Detroit, please see Heavy’s story here.

Tonight’s debate will be broadcast on NBC, MSNBC, and Telemundo. You can also watch a live stream of the debate at the bottom of this post via NBC News’ YouTube channel.

MSNBC’s broadcast begins officially at 9 p.m. Eastern, but they will also be airing a Democratic Candidates Debate Pre-Show from 7-9 p.m. Eastern, an hour before the official debate begins.

NBC will not have a pre-debate airing. The debate will air at 9 p.m. Eastern sharp and last for two hours.

To find out what channel NBC, MSNBC, or Telemundo is on for you, click here to go to TV Guide’s listings. Then change the “Provider” (right under TV Listings) to your local provider. You’ll be able to scroll down to see what channel any of those stations is on for you.

The debate will be held at the Adrienne Arsht Center for the Performing Arts in Miami. The moderators will be Savannah Guthrie, Lester Holt, Chuck Todd, Rachel Maddow, and Jose Diaz-Balart.

You can watch the debate live at 9 p.m. ET in the video player below: 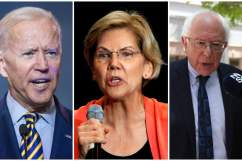 Loading more stories
wpDiscuz
0
0
Would love your thoughts, please comment.x
()
x
| Reply
Here is everything you need to know about how to watch tonight's Democratic debate on TV, including the TV channels where it will air.