Madison Campbell is the 23-year-old co-founder and CEO of MeToo Kits, the first at-home rape kit designed for commercial use, according to her social media.

Campbell has come under fire recently after she was accused of trying to profit off of the “‘Me Too’ Movement” and take advantage of sexual assault victims with MeToo Kits.

“We’re a small, two female company in Brooklyn, New York, and all we were trying to do is create a solution that would hopefully help survivors and this whole thing blew up,” Campbell told Bustle.

According to Rape, Abuse & Incest National Network (RAINN), only about 23 percent of rapes are reported to the police.

The MeToo Kit, which does not have an expiration date, provides a way for victims to collect and preserve evidence themselves with a container for saliva, swabs for the cheeks, and genital area and a bag for clothing. The MeToo Kit website advises users to take their kit to the police or Title IX office to file an official police report or Title IX report.

I understand that part of being a founder is viciously not sleeping, but man, this really sucks. Feeling the burn out of Silicon Valley. pic.twitter.com/YuER012gko

“I understand that part of being a founder is viciously not sleeping, but man, this really sucks,” Campbell wrote on Twitter. “Feeling the burn out of Silicon Valley.”

Campell wrote that since staring MeToo Kits, she has gone from sleeping for approximately six hours each night to about one hour. She is determined to make MeToo Kits available for everyone to help victims of sexual assault.

According to the website, MeToo Kits are designed to address the problem associated with traditional sexual assault kits available to survivors. The kit “empowers survivors to accurately collect evidence in a setting and timing of their choice.”

As illustrated on the website, customers are to swab the areas indicated in the instructions, spit into the provided container, and seal all of the collections as well as clothing articles in the packaging provided. In addition, the MeToo Kit integrates a user-friendly mobile application, so users can receive step-by-step guidance and support. The idea is that victims can choose precisely the information they want to share while using the MeToo Kit.

2. Campbell is a Sexual Assault Survivor and Advocate

Today, in a #SF bathroom as I was walking out washing my hands, a man walked into the bathroom while unzipping his pants in front of me and calling me pretty and asking how my day was. I literally thought this was a mirage. So chilling to think this might be okay behaviour.

According to her Twitter bio, Campbell is a “Female-Founder and Sexual Assault Advocate and Survivor.” She frequently posts and discusses topics surrounding rape and sexual assault.

Campbell told the Brooklyn Daily Eagle that she became a victim of sexual assault while she was in college. She said that she did not create the MeToo Kit to take advantage of survivors, only to help them.

“I know how terrifying and traumatic being sexually assaulted is,” Campbell told the Brooklyn Daily Eagle. “And I didn’t even want to touch myself after it happened, or go to anyone, or tell anyone about this. All I wanted to do was give survivors time to process their trauma. Even if it’s 24 hours or 72 hours, if you just give somebody time to process that traumatic event, they might be able to then go and file a police report, but by then the DNA can be completely degraded.” 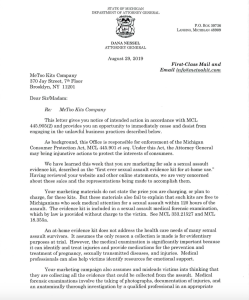 Michigan Attorney General Dana Nessel sent a cease and desist letter to MeToo Kits Company on August 29, 2019, warning the Brooklyn, New York-based company that it is in violation of several sections of Michigan’s Consumer Protection Act.

After learning that MeToo Kits is marketing a sexual assault evidence kit, Nessel’s office reviewed their website and other online statements. Nessel said they very concerned about sales and the representations made to induce them.

“Your marketing materials do not state the price you are charging, or plan to charge, for these kits,” the letter states. “But these materials also fail to explain that such kits are free to Michiganians who seek medical attention for a sexual assault within 120 hours of the assault. The evidence kit is included in a sexual assault medical forensic examination, which by law is provided without charge to the victim. See MCL 333.21527 and MCL 18.355a.” 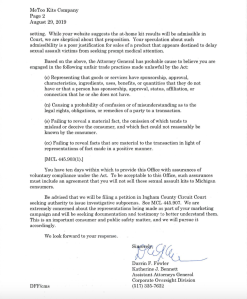 Nessel suggests that the kit will mislead victims into thinking that they are collecting all the evidence that could be collected from their assault, which includes forensic examinations, photographs and documentation of injuries, and an anatomically thorough investigation by a qualified professional in an appropriate setting.

In addition, while the MeToo Kit website suggests the at-home kit results will be admissible in Court, Nessel said that she is skeptical about that proposition.

“This company is shamelessly trying to take financial advantage of the ‘Me Too’ movement by luring victims into thinking that an at-home-do-it-yourself sexual assault kit will stand up in court,” Nessel said in a press release. “Nothing could be further from the truth. Career prosecutors know that evidence collected in this way would not provide the necessary chain of custody. And it is unlikely any private lab would have access to CODIS (Combined DNA Index System, a national DNA database created and maintained by the FBI), which would significantly limit the ability to identify unknown perpetrators or repeat offenders.”

4. MeToo Kits Are Not Yet For Sale

The MeToo Kit comes at a “pocket-friendly price,” according to its website, however, the kits are not yet for sale. Customers will soon be able to pre-order on the website.

“Our product is not on the market right now,” the website states. “Our current strategy is B2B sales, however, in the future, we look forward to augmenting sales via a consumer campaign on a crowdfunding platform, in conjunction with sales in pharmacies.”

According to the FAQ page, Campbell wants MeToo Kits to be analogous to fire alarms. The website suggests that the kits are not only for victims but also for people who want to be prepared. MeToo Kits hope to be so well-received that households across the world will buy them for themselves and loved ones, not only as a viable resource but as a symbol of protection and hopeful deterrent to assault.

“You do not buy a fire alarm for the 364 days you do not have a fire, you buy it for the one day you do. We trust this to be a deterrent for sexual assault.”

5. Cambell Gave a Tedx Talk About Illnesses and Space

Viruses in Space: Cancer at Home? | Madison Campbell | TEDxLincolnSquareFrom radiation to stress and a compromised immune system — traveling to outer space comes with a high price for those brave enough to venture into it. Madison Campbell’s talk illuminates this little-recognized challenge, and in doing so, poses a new question: Can studying the illnesses of space travelers help us unlock cures for Earth…2018-05-07T15:44:58.000Z

According to TEDx, Campbell studied epidemiology at the University of Massachusetts-Amherst. During her freshman year, she received a diagnosis of Thoracic Outlet Syndrome, which ultimately pushed her to seek more knowledge in the scientific field of infectious diseases, epidemiology, and neuro-epidemiology.

In March 2018, Campbell took the Tedx Lincoln Square stage in New York City to talk about viruses in space and cancer at home. She begins by placing the audience in a scenario in which they have signed up for a mission to create a new world on Mars.

“From radiation to stress and a compromised immune system — traveling to outer space comes with a high price for those brave enough to venture into it,” the video’s description reads. “Madison Campbell’s talk illuminates this little-recognized challenge, and in doing so, poses a new question: Can studying the illnesses of space travelers help us unlock cures for Earth dwellers?”

Campbell goes on to talk about the impacts that space travel has on our bodies, as evidenced in the research of retired astronaut Scott Kelley, who has spent more time in space than any other human. She said Kelly’s time in space accounts for only a fraction of the time it would take to get to and from Mars.

“I know I’ve kind of painted going to Mars as a death sentence, but it’s likely one to teach humanity important lessons about the way illnesses work in the human body,” Campbell says.

Read More
5 Fast Facts, Breaking News
Madison Campbell is the 23-year-old co-founder and CEO of MeToo Kits, the first at-home rape kit designed for commercial use, according to her social media.