34 people are presumed dead after a boat fire in the Channel Islands on Labor Day. (Photo Credit: Getty)

The 34 victims of the Santa Cruz boat fire are presumed dead, after over a day of searching by the Coast Guard and local authorities. The captain of the boat has been identified as Jerry Boylan; he is one of the five crew members who escaped the fire.

The fire took place on a 75 foot boat called The Conception, which left Saturday for a three day diving trip and caught fire early on Monday morning, while stationed near Santa Cruz Island. Authorities have not determined the cause of the fire.

All of the 34 victims were sleeping below deck at the time of the fire, authorities say. Five people escaped from the fire, all of whom were crew members and two of whom have leg injuries, according to CNN. The cause of the boat fire has not been determined. The owner of the boat, a company called Truth Aquatics, has provided no comment to news outlets about the incident, beyond confirming that they were in communication with the Coast Guard.

Captain Monica Rochester, US Coast Guard Los Angeles Long Beach Sector Commander, spoke in a press conference on Monday, confirming that the only mayday call the Coast Guard received about The Conception was that it was on fire. She added, “We are working deliberately with the vessel owner/operator, who is with us at the time working on a plan to conduct further assistance for his vessel.”

In the hours following the news, many local divers in the area lamented the horrific situation, with dozens of them noting the excellent reputation of Truth Aquatics. One person wrote on the Monterey Bay Area Scuba Divers Facebook group feed, “Many of us have dived from these boats and I was always impressed with the crew and the maintenance of the boats.”

Another person wrote on the group feed, “I’ve been on the Conception with my son. The crew was impeccable. Unfortunately the layout of the beds with one small stairwell as an exit would make escaping a fire above almost impossible. It’s just so awful.”

So far, seven people have been identified among the missing, and publications have confirmed two local high school students, as well as two parents, were on board the boat at the time of the fire. This list will continued to be updated as more information about the victims comes out.

Here’s what you need to know about the people who have been identified so far as having been on The Conception at the time of the fire:

Kristy Finstad’s brother, Brett Harmeling, shared the news of his sister’s involvement with the boat on Monday, several hours after news of the fire spread. “Please pray for my sister Kristy!!” he wrote. “She was leading a dive trip on this boat. ??”

Finstad co-owns the diving company which chartered the The Conception (the 75 foot boat that caught on fire early Monday morning). She became the owner of the company after her father passed away, according to The New York Post; she co-owns the company with her husband, Dan Chua.

Michael Quitasol and his three daughters, Evanmichel, Nicole, and Angela, were all on board The Conception at the time of the fire. This tragic news was confirmed by their mother, Susana Rosas, who wrote to Facebook,

It is with a broken heart … 3 of our daughters were on this boat. As of now they are still missing. My #1, Evanmichel Solano Quitasol, my #3, NicoleStorm Quitasol and my #4, Angela Rose Quitasol. My girls’ dad Michel Storm Quitasol and step mom were also on the boat. We are getting the latest information from the media. The authorities do not have much to say to us. Thank you to all of you for your support prayers and good wishes.

Evanmichel, 37, was a nurse at Kaiser Permanente hospital in the Central Valley. Michael was also a longtime staff member of the hospital system.

As for Angela, 28, she was a 7th grade science teacher at Sierra Middle School in the Stockton area, according to The Orange County Register. And Nicole, 31, was a bartender at Nicky Rottens Bar for over four years. The restaurant has created a GoFundMe page to raise money for funeral expenses.

Fernisa Sison is the third St. Joseph’s Medical Center staff member who was on board the boat at the time of the fire. Sison was Michael Quitasol’s partner and the step-mother of his three daughters.

A GoFundMe page has been set up by Fernisa’s own children. The GoFundMe summary reads, “Dom and Nisa’s beautiful mother, Fern, stepfather, Michael, and three stepsisters Evan, Nicole, and Angela Quitasol, were lost in this horrific tragedy. We have created this account to help support their family through this unthinkable time.” 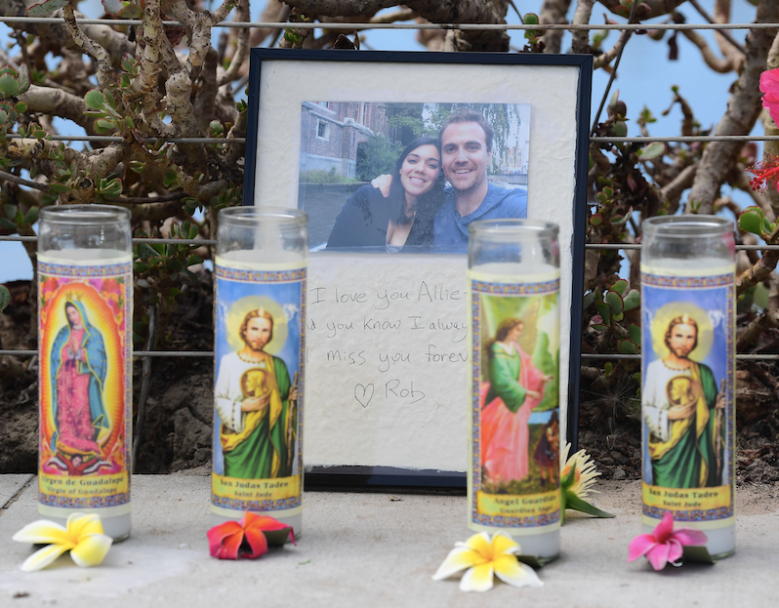 Alexandra Kurtz, 25, worked at Paramount Pictures and was originally from Cincinnati, Ohio. Her presence on The Conception was confirmed by her mother, who spoke to KTLA about her daughter’s passion to live in California.

Mother Cherie McDonough said of her daughter Alexandra that she was “following her dreams” when she moved to California. She said, “She loved it here. She loved the boat. She loved diving … she could do anything she wanted.”

Tia Salinka was on board The Conception with her parents at the time of the fire, according to Bay Area anchor Marianne Favro.

Tia was one of the two students from Pacific Collegiate School who were killed in the accident. Her friend, Berenice Felipe, was the other. Salinka was reportedly celebrating her 17th birthday on the trip.

Just spoke with the head of school at Pacific Collegiate School. She confirmed students were onboard the deadly boat fire in Southern California. Grief counselors are at the school today pic.twitter.com/YIkNZtNSj5

According to FoxLA, three of the people on board were celebrating birthdays, including a 17-year-old.

This post will be updated as more information comes.

Loading more stories
wpDiscuz
0
0
Would love your thoughts, please comment.x
()
x
| Reply
34 people are presumed dead after a Santa Cruz boat fire in the Channel Islands National Park on Labor Day. Here's what you need to know about the victims' names, photos, and more.