Getty Drew and Brittany Brees have become staples of the New Orleans community.

Drew Brees and his wife Brittany Brees are college sweethearts from their time together at Purdue. The Saints quarterback recently took to Instagram to celebrate 20 years of knowing his wife.

“Met the love of my life right here back in 1999. 20 years later…and each day she is more beautiful to me!” Drew noted while posting a photo of the couple at Purdue.

Met the love of my life right here back in 1999. 20 years later…and each day she is more beautiful to me!

The Brees family has become a staple of the New Orleans community since the quarterback joined the Saints. The couple are the proud parents of four kids: Rylen, Baylen, Bowen and Callen. Drew recalled to ESPN the Magazine his first memory of meeting Brittany while he was out celebrating his birthday at a Purdue area bar.

“I made a real fool of myself when I first met her,” Drew noted to ESPN the Magazine. “It was when I was a sophomore. It was my 20th birthday and I’d had about 17 shots and put my foot in my mouth. It was a typical football player cheesy line — we’ll leave it at that. It took me six months to get the courage to talk to her again. I finagled my way to get invited to a party that I knew she’d be at.”

Heading into surgery with this beautiful gal by my side. This is what she gets to do on her birthday today! I love you Brittany. More and more everyday!

Drew eventually left a better impression on Brittany than when they first met 20 years ago. Drew’s wife recently spent her birthday with the quarterback at the hospital as he had to have a procedure on his thumb. The Saints quarterback posted a photo with Brittany as he waited to have his surgery done back in September.

“Heading into surgery with this beautiful gal by my side. This is what she gets to do on her birthday today! I love you Brittany. More and more everyday!” Drew explained on Instagram.

The good news is that Drew was able to return to the field in Week 8 and so far has not suffered a setback. New Orleans is in contention for one of the top NFC seeds. Drew has been wearing a splint on his hand as he continues to recover from the surgery.

“I just feel comfortable doing it,” Drew noted to NOLA.com. “I don’t know how long that’ll be, but we’ll see. But it feels fine.”

Drew Praised His Wife at the 2019 ESPYs

Pretty awesome night.. capped off with a good after party celebration with the boys. That’s what you get after sitting still for three hours straight!

The couple made the 2019 ESPYs a family affair as they attended the event with their three sons. After Drew won the award for Best Record-Breaking Performance, the quarterback took time to praise his wife and noted how much she has helped his career.

“First and foremost, I want to thank my wife, Brittany Brees,” Drew said at the beginning of his acceptance speech. “I love you so much, and I fall more in love with you each and every day. Thank you for being on this journey with me. I couldn’t do it without you.” 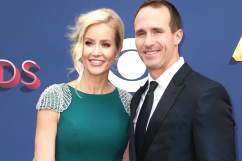 Loading more stories
wpDiscuz
0
0
Would love your thoughts, please comment.x
()
x
| Reply
Drew Brees recently gave his wife Brittany Brees an Instagram shoutout. Find out what the Saints quarterback had to say about his partner.