Lev Parnas is a Soviet-born businessman and an associate of President Donald Trump’s personal lawyer Rudy Giuliani. He was indicted in November 2019 on charges of campaign finance fraud in connection with the impeachment inquiry against the president.

Parnas is an American citizen who grew up in Brooklyn and lived in Florida. He was recently arrested at Dulles International Airport in Virginia trying to head to Ukraine on a one-way ticket with his fellow associate Igor Fruman.

He has been cooperating with Congress on President Trump’s impeachment trial. On January 14 he handed over a trove of documents to the House Intelligence Committee, which has handed it over to the House Judiciary Committee, according to Parnas’ attorney, Joseph Bondy.

HPSCI has just transmitted evidence from Lev Parnas to the Judiciary Committee, which it deemed relevant to @POTUS’ impeachment inquiry. Mr. Parnas remains committed to testifying as to all the actions he took in Ukraine on behalf of @realDonaldTrump. #LetLevSpeak #LevRemembers pic.twitter.com/udaua1zwPj

“HPSCI has just transmitted evidence from Lev Parnas to the Judiciary Committee, which it deemed relevant to
@POTUS’ impeachment inquiry. Mr. Parnas remains committed to testifying as to all the actions he took in Ukraine on behalf of @realDonaldTrump. #LetLevSpeak #LevRemembers,” Bondy tweeted.

Almost 400 more pages of Parnas docs, including this one from Rudy Giuliani about Zelensky: "Show him my tweets and tell him to tell President-elect to stop acting like a boy and become a man and take control. Arrest this bum & take more of his money back" https://t.co/kmHq7JBurY pic.twitter.com/rM5a83N8RC

Here’s what you need to know about Lev Parnas.

1. Lev Parnas Calls Rudy Giuliani a ‘Very Dear Friend of Mine’ and Made Large Donations to the Trump Campaign

Parnas caught the attention of U.S. campaign finance officials when his company, Global Energy Producers, made large donations to the Trump campaign in the 2016 election.

“You know, this is actually the first couple of times that I really started doing some bigger donations, because I wanted to get notoriety for my energy company and I felt it might be a great way to play with the big boys, as you call it,” he told NPR.

Parnas said he and Giuliani did business together for a company he started called Fraud Guarantee.

“We actually met with the mayor on a business transaction about a company that I own back in the days. And the business didn’t work out. But we just became good friends and started spending a lot of time together,” Parnas told NPR.

“Because of my Ukrainian background and my contacts there, I became like Rudy’s assistant, his investigator,” Parnas told the New Yorker. “I don’t do anything on my own. I don’t lobby people. I go get information. I set up a meeting. I make sure that the call went right. I make sure the translation is done right.”

2. Lev Parnas Was Indicted on Charges of Campaign Finance Fraud in Connection With Helping Rudy Giuliani Dig Up Dirt on Former Vice President Joe Biden and Ousting the U.S. Ambassador to Ukraine

In this handout photo provided by the Alexandria, Virginia Sheriff’s Office, Lev Parnas poses for a booking photo October 9, 2019 in Alexandria, Virginia. Parnas and Igor Fruman, who were arrested as they were trying to leave the U.S., are associates of Rudy Giuliani, President Trump’s personal lawyer. Fruman and Parnas were both charged with campaign finance violations for allegedly trying to use foreign money to influence U.S. politics. Photo by Alexandria Virginia Sheriff’s Office via Getty Images

Lev Parnas was arrested at Dulles International Airport on Oct. 9 as he was trying to board a one-way flight to Ukraine with his associate Igor Fruman.

According to a press release from the Southern District of New York, Parnas, Fruman and two other associates were charged with conspiring to “violate the ban on foreign donations and contributions in connection with federal and state elections.”

Parnas and Fruman were also charged with “conspiring to make contributions in connection with federal elections in the names of others, and with making false statements to and falsifying records to obstruct the administration of a matter within the jurisdiction of the Federal Election Commission.”

Parnas was also accused of trying to help remove U.S. Ambassador to Ukraine Marie Yovanovitch from her post. President Donald Trump recalled her back to Washington in May and called her “bad news,” saying she was not loyal to the Trump Administration. 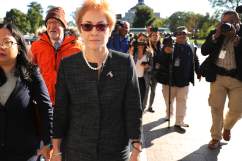 Parnas has pleaded not guilty.

On November 24, ABC News reported that there are video and audio recordings of Rudy Giuliani and Donald Trump that Parnas has handed over to the House Intelligence Committee, which is conducting an impeachment inquiry against the president. “It was unclear what the content depicts and the committees only began accessing the material last week,” ABC News said.

“Maybe they were clients of Rudy. You’d have to ask Rudy,” Trump said.

According to The New York Times, Parnas was upset that the president refused to admit he knew him and has now agreed to cooperate with the investigation.

His attorney Joseph Bondy said Parnas would invoke his Fifth Amendment rights in the case, but had a change of heart after being snubbed by President Trump.

“Mr. Parnas was very upset by President Trump’s plainly false statement that he did not know him,” Bondy said.

CNN compiled a list of at least 10 times that Parnas and Trump met dating back to 2014.

New: We obtained a photo of Lev Parnas with Jared Kushner and Ivanka Trump, indicating he met them at least once. https://t.co/gRtpZjJnRW pic.twitter.com/IEryg7Bzyv

4. Lev Parnas Was Born in the Soviet Union and Moved To the United States As a Young Child, Living in Detroit, Brooklyn and Florida

Lev Parnas was born in Ukraine under the former Soviet Union. He is married to his wife Svetlana and they have a son, Aaron, together who once interned at Rudy Giuliani’s former law firm Greenberg Traurig. 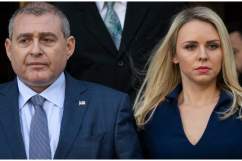 “He’s the real story,” Parnas told the New Yorker. “My son graduated college at 16. He’s graduating law school at 20. He’s about to be a lawyer. He’s doing some fascinating things. He wants to be president one day.”

Parnas briefly lived in Detroit before moving to Brooklyn, where he first learned the Trump name working at Kings Highway Realty selling Trump Organization co-ops. “That was my first time knowing who Trump was, but, growing up in that area, you knew who Trump was, because his name was all over the place,” he told the New Yorker.

5. Lev Parnas Is Being Sued for Accepting a $100,000 Investment To Make a Film Called ‘Anatomy of an Assassin’ and the Plaintiffs Now Want To Seize His $200,000 Bond To Pay Off His Debt

Breaking via Reuters: Lev Parnas, the indicted Ukrainian-American businessman who has ties to Rudy Giuliani, is now prepared to comply with requests for records and testimony from congressional impeachment investigators, his lawyer told Reuters. https://t.co/UXyPkOH586

In a court filing with the U.S. District Court in the Eastern District of New York, Parnas is accused of taking a $100,000 from Michael Pues for an investment in a film production company to make a movie called “The Anatomy of an Assassin.”

According to court papers:

At the end of 2010, introduced by Lev Parnas, Pues met with Rudy Durand at the Carlyle Hotel, in New York City, in order to invest in the movie business. He had no prior experience in investing in movies. He went to dinner with Durand. Jack Nicholson was also at the dinner. Pues was very impressed. The defendant told him that he will make a lot of money with this investment. He felt that he would have money for his children and for their college educations. The defendant told him that “I should have no problem making two million off a percentage point.” Pues decided to invest $100,000 in Koala Productions. That week he received “two percentage points.” He was told he would receive the $100,000 back “before the movie is shot.”

The film was never made.

Pues ultimately invested hundreds of thousands of dollars with Parnas and is now trying to seize the $200,000 bond Parnas posted after his Oct. 9 arrest at Dulles International Airport on charges of campaign finance fraud related to the impeachment inquiry into President Donald Trump, USA Today reported.

“In a rare but not unprecedented action, the trust filed an Oct. 29 writ to garnish $200,000 that Parnas’s family posted to secure his $1 million appearance bond in the criminal case. The bond keyed a judge’s decision to order Parnas held under home detention, rather than jail, pending trial,” USA Today wrote.

Loading more stories
wpDiscuz
0
0
Would love your thoughts, please comment.x
()
x
| Reply
Lev Parnas is a Soviet-born businessman and an associate of President Donald Trump's lawyer Rudy Giuliani. He has been indicted on charges of campaign finance fraud in connection with the impeachment inquiry against the president.