Former New York City Mayor Mike Bloomberg announced on Sunday, after much speculation, that he is running for president of the United States in 2020. Bloomberg, a billionaire from Massachusetts who became mayor of New York City shortly after the terror attacks on Sept. 11, 2001, will run as a Democrat and said he is running “to defeat Donald Trump and rebuild America.”

Here’s what you need to know about Mike Bloomberg.

1. Mike Bloomberg Considered Running for President in 2016 and Has Fueled Speculation About a 2020 Run for Months

The stakes could not be higher.

We must win this election.

And we must begin rebuilding America. https://t.co/W6P9uaCyqN

Mike Bloomberg served three terms as New York City mayor, taking office shortly after the terror attacks on Sept. 11, 2001. He is a billionaire who worked on Wall Street and co-founded Bloomberg and Bloomberg News. He considered running for president in 2016, but ultimately decided not to and endorsed the Democratic nominee, former First Lady and Secretary of State Hillary Clinton.

“We cannot afford four more years of President Trump’s reckless and unethical actions. He represents an existential threat to our country and our values. If he wins another term in office, we may never recover from the damage,” his campaign website says.

Bloomberg, a lifelong Democrat, ran as a Republican for mayor of New York City just before the terror attacks on Sept. 11, 2001. He ran against New York City Public Advocate Mark Green and won. He served three terms as mayor, from 2002 to 2013. Bloomberg registered as an Independent ahead of the 2008 presidential election, raising speculation that he would run for president. Bloomberg left City Hall on Dec. 31, 2013.

Bloomberg is now running as a Democrat in the 2020 presidential election. 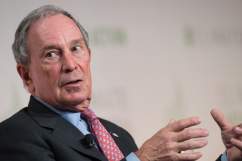 2. Mike Bloomberg Is Known For His Ban On Smoking in New York City and His Fight Against Illegal Guns in the United States

Since leaving City Hall, I founded the largest gun safety group in history, & created a campaign to take on the biggest polluters and climate threats. And we continue to win battles against the tobacco industry & their sleazy attempts to hook young kids on e-cigarettes. pic.twitter.com/eA6E2yeTJz

During his tenure as mayor, Mike Bloomberg enacted a smoking ban in New York City.

“Mike’s philanthropic work to reduce tobacco use has helped save 35 million lives across the globe,” according to his campaign website.

BREAKING: One of the world's richest men, anti-gun extremist and hypocrite Michael Bloomberg filed federal papers today, declaring himself a Democratic candidate for president. @NRA members – this is your call to action. We have to make sure he fails. https://t.co/ccARTmfdw9

3. Mike Bloomberg Worked on Wall Street in the 1970s, Got Laid Off and Created the Bloomberg Terminal

Today, our company employs 20,000 people, and generates large profits, almost all of which go to helping people across the country and around the world. pic.twitter.com/kKIj31KMSQ

Mike Bloomberg began working for Salomon Brothers in 1973, was laid off and used the money he earned toward creating the Bloomberg terminal, which has become a staple of Wall Street.

“When I was 39, I got laid off. I didn’t know what I’d do next. But I had an idea to start a company – so I took a chance,” Bloomberg’s campaign tweeted on Sunday. “Today, our company employs 20,000 people, and generates large profits, almost all of which go to helping people across the country and around the world.”

In 1981, Bloomberg founded Bloomberg LP, which is now a multi-billion company. In 1990, he went on to launch Bloomberg News, a widely read financial and news site. On Sunday, after announcing his candidacy, Bloomberg News Editor-in-Chief John Micklethwait sent a memo to his staff saying the news organization would not conduct any investigative reporting on Mike Bloomberg or any of the Democratic candidates.

Bloomberg News has struggled in the past with Mike Bloomberg's political ambitions, as I noted a couple weeks back: https://t.co/VpfptBZiAb Editor-in-Chief John Micklethwait addressed today how the newsroom will cover now that the owner is officially in the race: pic.twitter.com/ybCaHFuim1

4. Mike Bloomberg Is Known for His Philanthropy

Since leaving the New York City mayor’s office in 2014, Bloomberg has run Bloomberg Philanthropies, which is described on its website as a “data-driven approach to global change.”

“Bloomberg Philanthropies focuses on five key areas for creating lasting change: public health, environment, education, government innovation, and arts & culture. These five areas encompass the issues Mike Bloomberg and his team are most passionate about, and where they believe the greatest good can be achieved,” its website says.

“Mike Bloomberg has always been attracted to challenges where the potential for controversy or failure keeps others at bay. That approach comes from his entrepreneurial instincts and his belief in leading from the front, regardless of popular opinion or special interest politics.”

In 2010, Bloomberg signed on to the “Giving Pledge,” an agreement among 40 of the world’s billionaires, including Richard Branson, Warren Buffett and Bill Gates, who pledged to give the majority of their wealth to charity.

“As I wrote in my autobiography … the reality of great wealth is that you can’t spend it and you can’t take it with you,” he said.

5. Mike Bloomberg Is Divorced With Two Daughters and Has Dated His Girlfriend Diana Taylor for More Than 20 Years

New York City Mayor Michael Bloomberg and girlfriend Diana Taylor attend the game between the New Jersey Nets and the New York Knicks at Madison Square Garden March 18, 2009 in New York City. NOTE TO USER: User expressly acknowledges and agrees that, by downloading and/or using this Photograph, User is consenting to the terms and conditions of the Getty Images License Agreement. Photo by Chris McGrath/Getty Images

Diana Taylor is the longtime girlfriend of former New York City Mayor Mike Bloomberg. They began dating in 2000 after he divorced his wife Susan Brown.

Taylor was considered the unofficial First Lady of New York City during Bloomberg’s three terms as mayor although the two have never married. She has a long career in banking and finance, serving as New York State’s superintendent of banks from 2003 to 2007. 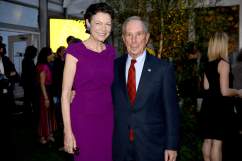 Diana Taylor was floated as a possible Republican challenger against New York Sen. Kirsten Gillibrand in 2010. Taylor, a private figure in New York City who rarely gives interviews, told the New York Daily News that it would have been difficult to run for the Senate seat while her boyfriend Mike Bloomberg was serving his third term as New York City mayor. She eventually announced that she would not seek the Senate seat.

The pair met during a Citizens Budget Committee meeting in New York City in 2000 when Taylor was vice president of KeySpan Energy. Bloomberg went on to become mayor after the Sept. 11, 2001 terrorist attacks and Taylor became chief financial officer for the Long Island Power Authority in 2001, according to a professional bio.

From 2003 to 2007, Taylor served as New York State Superintendent of Banks. President George W. Bush considered her to head up the Federal Deposit Insurance Corporation, or FDIC, according to the New York Daily News, but her name was eventually withdrawn from consideration.

Taylor lives with Bloomberg at his townhouse on the Upper East Side of Manhattan. She gets along with Bloomberg’s two adult children, Georgina and Emma, and his ex-wife Susan Brown.

Read More
2020 Presidential Election, New York City, Politics
wpDiscuz
0
0
Would love your thoughts, please comment.x
()
x
| Reply
Former New York City Mayor Mike Bloomberg announced on Sunday, after much speculation, that he is running for president of the United States in 2020. Bloomberg, a billionaire from Massachusetts who became mayor of New York City shortly after the terror attacks on Sept. 11, 2001, will run as a Democrat and said he is running "to defeat Donald Trump and rebuild America."