Evenaud Julmeus is a Florida man facing child abuse charges after police said he abandoned a young boy near a closed police station because he thought the child was gay. The police affidavit states that the child was forced to get out of the vehicle after Julmeus had paused along the highway in the turning lane.

Local news outlets have reported that the child was Julmeus’ son. The police affidavit does not confirm this information, as portions of the report have been redacted, but they do live together with the child’s mother.

This incident occurred in Haines City, about 50 miles south of Orlando in Polk County.

1. Evenaud Julmeus Found Male Pornography On the Child’s Phone & Determined That the Boy Must Be Gay

Police did not release the age of the boy who was left near the closed police station. That portion of the affidavit was blacked out, as well as the child’s name. He is identified only as a juvenile, and the report does not specify whether Evenaud Julmeus is his biological father.

The child told investigators that Julmeus left him on the side of the road because he believed that the boy was gay. When asked why Julmeus would think that, the boy initially responded, “He just does.”

But the child eventually told officials that he and Julmeus had gotten into a verbal argument after Julemeus discovered male pornography on the boy’s phone. The boy clarified that there were “no females” on the phone. He said that Julmeus “became very upset” and told the boy to pack a duffel of clothing.

2. Affidavit: Evenaud Julmeus Left the Child In the Turning Lane of a Highway & Told Him That the Police Would Find Him a New Home 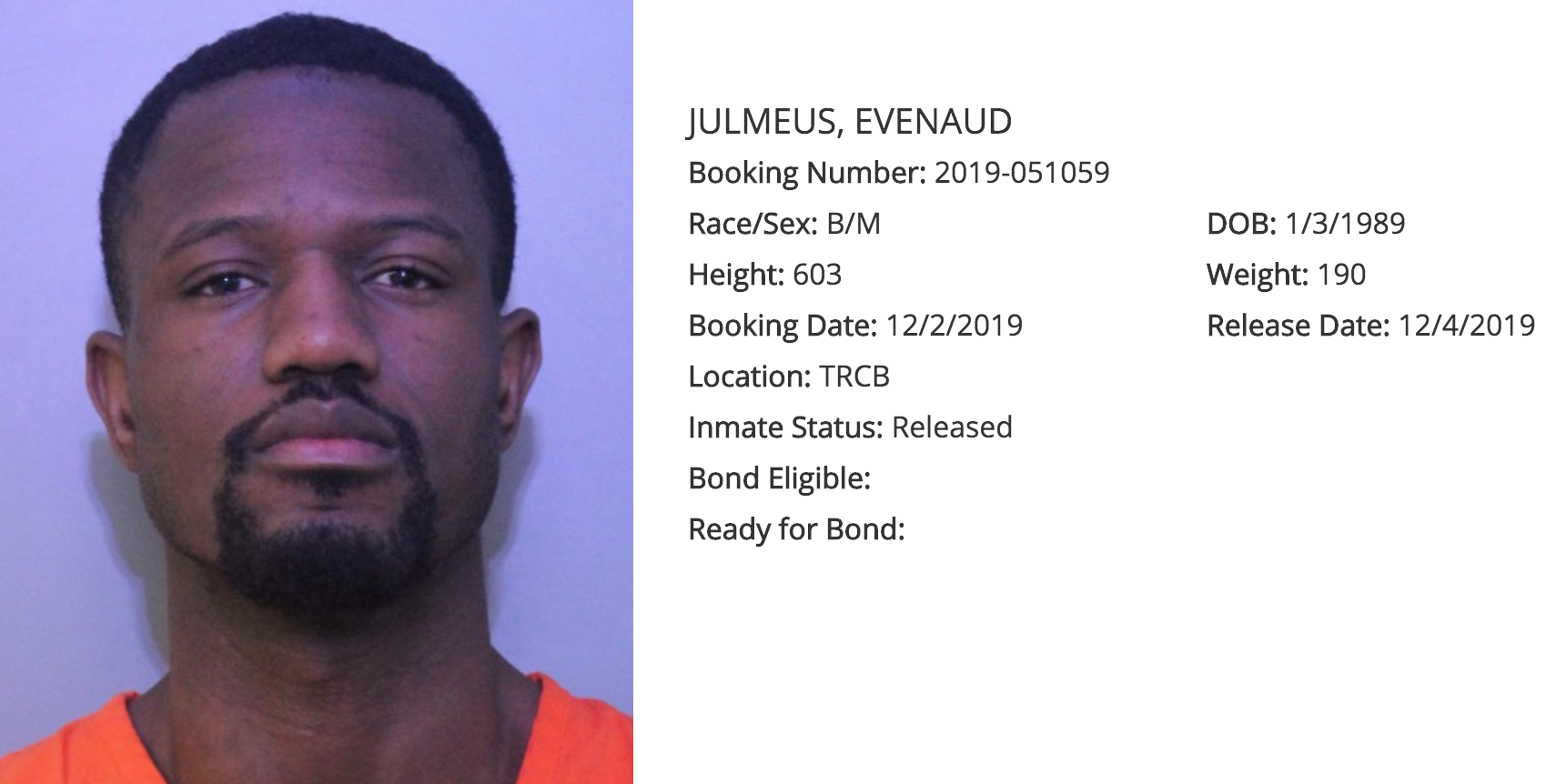 Evenaud Julmeus drove the boy to the Haines City Police Department on December 1, 2019, around 9:30 p.m. According to the affidavit, the department was closed.

Police said that Julmeus did not pull into the parking lot. Instead, he stopped in the turning lane on Highway 27 and made the boy get out of the vehicle. The child told police that Julmeus had told him, “the police will find you a new home.” The child did not have any money, food, or water. The report says the child was also left without a phone.

The affidavit states that a bystander saw the child get out of the vehicle and observed Julmeus make a U-turn and leave. The witness pressed a button outside of the police department to report the incident.

3. Police: The Child’s Mother Went to Look For Him After Evenaud Julmeus Told Her That He Had Abandoned the Boy

Evenaud Julmeus informed the boy’s mother about what he had done after getting home, according to the police affidavit, which is available on the Polk County Clerk of Courts website.

The police report states that the boy’s mother got out of the shower and realized that Julmeus had come home without her son. Julmeus told her that she could pick the child up at the police station if she wanted.

As referenced above, portions of the affidavit were blacked out. The witness name that was not redacted was Janay Capri Angervil. She appears to be the child’s mother. A search of online records brings up an address in Polk County where both she and Julmeus appear to live.

They are not married. The booking sheet from the Polk County Sheriff’s Office states that Julmeus’ is single. The sheet also lists his occupation and employer as “unknown.”

4. Police: Evenaud Julmeus Left Two Young Children Home Alone After the Mother Went to Pick Up the Other Child From the Police Station

Evenaud Julmeus is facing three counts of “Negligent Child Abuse without Bodily Harm.” The extra two counts stem from the fact that he left two other young children alone at the home, according to Haines City Police.

When the boy’s mother went to pick him up from the police station, she left Julmeus at the house with two other children. The affidavit states that the other children included a 9-year-old girl and a toddler. Julmeus “fled the residence” before officers arrived. The young girl told police that she had “never been left home alone before.”

Julmeus turned himself in to Haines City Police the following morning, on December 2, 2019. He was arrested on the three charges and booked into jail. Inmate records show that Julmeus made bond and was released from custody on December 4.

Court records show that he will be formally arraigned on January 7, 2020, at Bartow Courthouse. He is being represented by a Public Defender.

5. Evenaud Julmeus Has Previously Been Arrested On Suspicion of Domestic Violence

Evenaud Julmeus has been arrested before. Court records indicate that he has been cited multiple times on traffic violations in Florida. But in 2014, he was also arrested in Orange County, Florida on an accusation of violence in the home.

Court records show that Julmeus was arrested in August of 2014 on Battery (Domestic Violence), which is a misdemeanor. The conditions of his release included that he have “no hostile or violent contact with the victim” and that he was not permitted to possess any firearms or weapons.

Julmeus paid a $1,000 bond and was released. But the bond was discharged in October of 2014 and the court record does not include any further actions beyond that time and the case was closed. It would appear that the charge may have been dropped.

Read More
5 Fast Facts, Breaking News, Crime, Florida
Evenaud Julmeus is charged with negligent child abuse after police said he abandoned a child along a highway because he thought the boy was gay.