During this week’s Democratic presidential debate in Des Moines, Iowa, Massachusetts Sen. Elizabeth Warren and Vermont Sen. Bernie Sanders disagreed about a comment she said he made a year ago about how a woman could not win the 2020 presidential election against President Donald Trump.

Sanders said he never made the comment. Warren said he did. During the debate, it seemed that they agreed to disagree. But once the debate ended, Sanders approached Warren to shake her hand. She didn’t and instead appeared to confront him, but the audio wasn’t available.

Here’s what the two presidential hopefuls said to each other:

WARREN: “I think you called me a liar on national tv.”

WARREN: “I think you called me a liar on national tv.”

Sanders and Warren have been at odds over a comment that Warren said Sanders made in 2018 that a woman could not beat Trump in the 2020 election. Sanders denies making that comment. “It is ludicrous to believe that at the same meeting where Elizabeth Warren told me she was going to run for president, I would tell her that a woman couldn’t win,” Sanders said in a statement to CNN.

Warren said she sticks by her claim that Sanders made the statement during a 2018 meeting. “Among the topics that came up was what would happen if Democrats nominated a female candidate,” Warren said in a statement. “I thought a woman could win; he disagreed.”

During Tuesday night’s debate, the subject was brought up by the moderators and Sanders said:

“Bernie is my friend and I’m not here to fight with Bernie… This question has been raised and it’s time to attack it head on. Can a woman beat Donald Trump? Look at the men on this stage. Collectively they have lost 10 elections.” 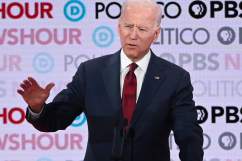 What Did Biden Say to Bernie During the Debate Introduction?

The debate featured Sanders, Warren, Steyer, former South Bend, Indiana, Mayor Pete Buttigieg, former Vice President Joe Biden and Minnesota Sen. Amy Klobuchar. Warren and Sanders have had an unofficial pact not to attack each other during the presidential campaign. Sanders lost the Democratic nomination to former First Lady and Secretary of State Hillary Clinton in the 2016 presidential election. 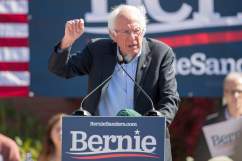 Loading more stories
wpDiscuz
0
0
Would love your thoughts, please comment.x
()
x
| Reply
During this week's Democratic presidential debate in Des Moines, Iowa, Massachusetts Sen. Elizabeth Warren and Vermont Sen. Bernie Sanders disagreed about a comment she said he made a year ago about how a woman could not win the 2020 presidential election. Here's what Warren said to Sanders after the debate, caught on backup audio by CNN.