A Twitter joke announcing Senate Majority Leader Mitch McConnell had coronavirus hit the internet at 7:30 p.m. before it was taken down by Twitter.

The joke was written by Jena Friedman, a former writer on The Late Show with David Letterman and producer on The Daily Show with Jon Stewart who has more than 50,000 Twitter followers.

Here is the original tweet, which received 1,300 retweets and 5,200 likes before it was removed: 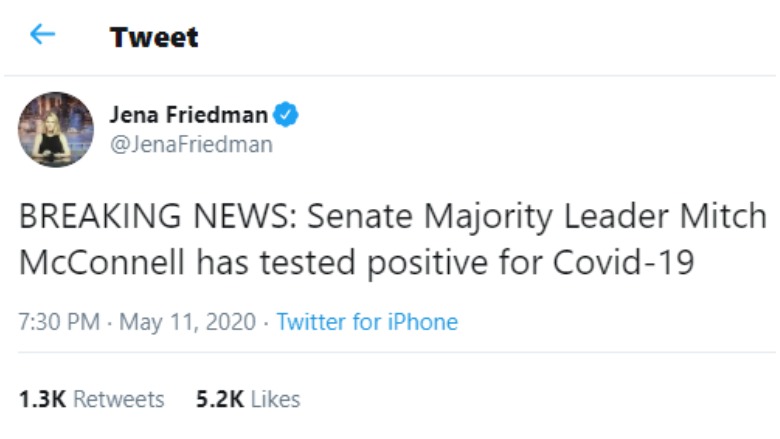 She repeated the message again at 8:49 p.m., this time with a question mark at the end.

This isn’t the first time Friedman has tweeted about a White House official having coronavirus.

Stephen Miller, a senior White House advisor to President Donald Trump, did not have coronavirus at the time of the tweet and has not reported having coronavirus, despite his wife’s positive test earlier three days ago.

Friedman said the tweets, while hoaxes, are meant to send a message about people’s level of social media literacy and ability to discern fact and “fake news.” Still, many of her Twitter followers were angry about the hoax:

What's wrong with you?

Both of Friedman’s tweets have since been deleted. In their place is a message from Twitter which says, “This Tweet is no longer available because it violated the Twitter Rules. Learn more.”

The blue-check mark by Friedman’s name indicates that she is Twitter verified, which means that the account is authentic. However, Twitter states that the account has stopped accepting new requests. Moreover, the site says it reserves the right to remove the verified status based on behaviors that “violate the Twitter Rules.”

Friedman’s tweet came on the same day that Twitter announced it would label posts “containing misleading information about the coronavirus pandemic.”

Twitter had announced earlier on April 1 that it was taking several steps to prevent misinformation from spreading by “broadening” the definition of harm.

Since introducing these policies on March 18, we have removed more than 1,100 tweets containing misleading and potentially harmful content from Twitter. Additionally, our automated systems have challenged more than 1.5 million accounts which were targeting discussions around COVID-19 with spammy or manipulative behaviors. We will continue to use both technology and our teams to help us identify and stop spammy behavior and accounts.

In a May 11 update, Twiter said that it would take action based on misleading information, disputed claims and unverified claims. The label, according to Twitter, will include a link to a Twitter-curated page with factual information related to the tweet.

Twitter is not the only media organization facing challenges in reducing the spread of misinformation. Facebook and Google (which owns YouTube) have also come under fire in recent years for the lack of regulation on its platforms but recently announced joint efforts to prevent false or misleading statements from encouraging harmful activity.

Facebook has announced its own attempt to crack-down on misinformation:

That’s why we work with over 60 fact-checking organizations that review and rate content in more than 50 languages around the world … Once a piece of content is rated false by fact-checkers, we reduce its distribution and show warning labels with more context. Based on one fact-check, we’re able to kick off similarity detection methods that identify duplicates of debunked stories.

The company said that during March, they placed warnings on 4,000 articles and 40 million coronavirus-related posts using its fact-checkers.

YouTube has also introduced changes in the wake of the virus, and the company said it would ban “medically unsubstantiated” coronavirus-related messages or those which contradict World Health Organization advice.

Facebook and YouTube recently put this into practice following the release of a clip from Mikki Willis‘ film, Plandemic, which featured several unsubstantiated claims from Dr. Judy Mikovits.

READ NEXT: Is the TikTok App Shutting Down? No, It’s a Fake Rumor

Loading more stories
wpDiscuz
0
0
Would love your thoughts, please comment.x
()
x
| Reply
A Twitter joke announcing Senate Majority Leader Mitch McConnell had coronavirus hit the internet at 7:30 p.m. before it was taken down by Twitter.