It’s not a very catchy name — 47D11 — but a new antibody has been created by a group of scientists who announced on Monday that tests in their Dutch laboratory show it can neutralize more than one kind of coronavirus, including SARS-CoV-2, the strain causing the current COVID-19 global pandemic.

The breakthrough by a team of medical researchers based in the Netherlands and Germany was announced today in the scientific journal Nature Communications.

Bloomberg News described the results as “an early but promising step in efforts to find treatments and curb the pandemic’s spread.”

“Neutralizing antibodies can alter the course of infection in the infected host (by) supporting virus clearance or protecting an uninfected host that is exposed to the virus,” the researchers wrote in their summary.  “Hence, this antibody – either alone or in combination – offers the potential to prevent and/or treat COVID-19.”

The team said that 47D11 will also be useful in developing “antigen detection tests” and other forms of blood tests to identify patients who have the COVID-19 virus.

GettyMedical personnel of Defence operate in the hospital UMC Utrecht on April 8, 2020, amid the COVID-19 crisis.

The possibility that the newly engineered antibody could be used to actually prevent COVID-19 infections in the first place puts it in a class by itself as researchers around the globe race to try and develop a vaccine to counter the outbreak, which has already killed over a quarter of a million people worldwide in just five months’ time.

However, just because the experiment has worked so far in human cell cultures in test tubes, it does not necessarily mean there is a clear and quick path to treating people with it in clinical settings.

Normally, a drug based on a monoclonal antibody like 47D11 would have to be proven out through several years’ worth of animal and then human testing to make sure it was safe and effective. Even if pharmaceutical companies obtain emergency waivers from regulatory authorities to skip several of those intervening steps (something that is being done now for the dozens of COVID-19 vaccine candidates that are under development), it’s not clear how much that might speed up the development process.

Monoclonal Antibodies Have Been Used to Treat Arthritis and Cancer 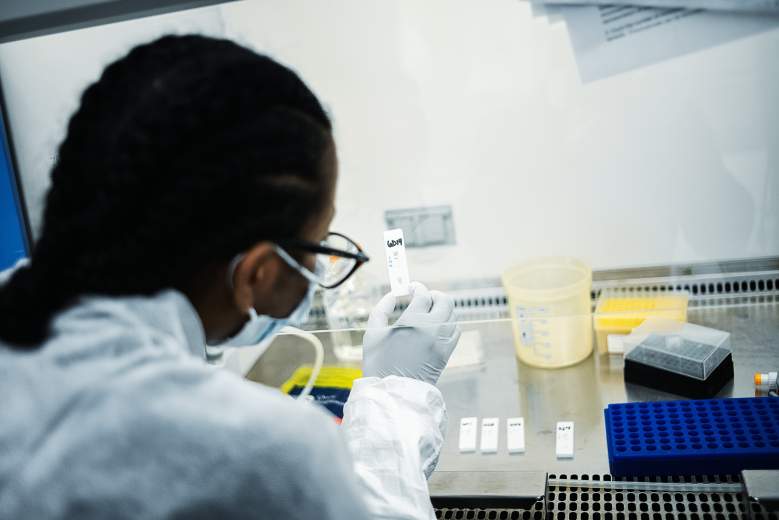 Other successful disease treatments based on monoclonal antibodies, including several for cancer patients, have been tested and approved, some in as little as three years’ time.

Monoclonal antibodies are synthetic proteins that mimic the way the body’s own defense mechanisms would normally work against infectious diseases. Each version is fine-tuned against a specific feature found on the particular germ or hostile tumor cell it is targeting.

In the case of coronaviruses, 47D11 is designed to attach itself to the distinctively spiky “crown-like” proteins on the surface of the viruses, which give the whole class of viruses their name (“corona” is Spanish for crown).

The spikes aren’t just cosmetic — they are the “keys” that fit into the “locks” (microscopic protein receptors on the surface of human cells), particularly in the human respiratory system and lungs, which allow the virus to invade and infect the host body.

Read More
Coronavirus
Follow Heavy ↓
This antibody - either alone or in combination (with other drugs and therapies) - offers the potential to prevent and/or treat COVID-19.