Getty MIAMI, : Miami Heat head coach Pat Riley (L) and his assistant Stan Van Gundy (R) watch during the last seconds of their NBA first-round Eastern Conference playoff game with the New York Knicks at the Miami Arena 03 May. The Knicks beat the Heat 98-81 and will play the Indiana Pacers in the next series. AFP PHOTO/Rhona WISE (Photo credit should read RHONA WISE/AFP via Getty Images)

The Miami Heat were a floundering franchise in the early to mid 1990s. Seven seasons after having come into the NBA, they were still a club that was floundering in the middle of the pack in the Eastern Conference.

For many, 1995 was the most pivotal point in the history of the franchise as they acquired arguably the most important figure in their history.

Pat Riley’s arrival in South Florida was analyzed by Sports Illustrated writer Chris Herring in his book “Blood in the Garden: The Flagrant History of the 1990s New York Knicks” that was released on Tuesday.

The New York Times published a series of excerpts from Herring’s book where he talked about the reasons that forced Riley to leave The Big Apple.  This was during a time where his Knicks side was embattled with their level of play and in the dressing room after having come up short in the NBA Finals the prior season.

The @nytimes published an excerpt from Blood in the Garden—the full deep dive on exactly how Pat Riley quietly maneuvered to leave the Knicks for Miami https://t.co/2yazLaWf1x

This excerpt begins at this stage where Riley found himself in the crossfire of a locker room rift when his team found itself with a 12-12 record. 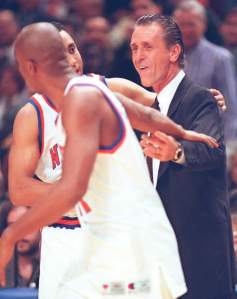 Riley Was On The Way Out

According to the book, Riley decided to give his team some time off from to clear their heads. He ended up going to Colorado and took some time off where he had a fateful conversation with a person that would set the gears in motion.

“I don’t know if this [situation with the Knicks] is going to work out,” Riley told real estate developer and friend Rick Butera and other friends while at the developer’s home.

Butera was amongst a group of investors at the time that were looking to buying the Miami Heat from then-owner Lewis Schaffel while the team was being run by Billy Cunningham under the back of Ted Arison. During that time, the Heat were a franchise mired in mediocrity as both fellow expansion sides Charlotte Hornets and Orlando Magic surpassed them.

Their only true success was a playoff appearances in 1993 and 1994 where they were swept out by Michael Jordan and the Chicago Bulls and went the distance with the Atlanta Hawks in the first round as the eighth seed. Despite that, the franchise only had one winning season up to that point.

This eventually led to the sale of Cunningham and Schaffel’s interests in the team to Micky Arison in 1995, this after Butera’s group’s bid fell through.

Butera did end up getting Riley in contact with Arison and they both met later and would end up coming to an agreement on a series of demands that seemed over the top for any NBA coach at that time.

Butera and Riley soon compiled a list of asks in a four-page, 14-point memo. Riley wanted an immediate 10 percent ownership of the team and another 10 percent share over the course of his deal. He also wanted Arison to loan him money to pay taxes on the initial 10 percent stake.

He also wanted complete control over Miami’s basketball operations, and to be named the team president. Riley wanted Arison to purchase his sprawling homes near Los Angeles and New York City. He wanted a limo service to and from games in Miami. He wanted credit cards and a $300 per diem.

In the end, Arison said yes and made a move that was going to change the franchise forever.

Two years later, the Heat would reach the Eastern Conference finals where they would fall once again to the Bulls while their rivalry with the Knicks would bloom for seasons to come, seeing many potential seasons thwarted by Riley’s former team.

But during that time, the Heat became a team with an identity and national projection.  More importantly, they marked an era of the NBA and changed the game forever.

In the long run, having the former Lakers and Knicks coach on board would end up turning the Heat into one of the best-run franchises in the NBA and one of the most successful ones in the 21st century.

Now 27 years and three NBA titles later, it is safe to say that the original investment by Arison and the Heat paid dividends for them.