Kentucky Attorney General Daniel Cameron has commented about Megan Thee Stallion’s Saturday Night Live performance calling him out over his handling of the Breonna Taylor case. During her performance, the “WAP” rapper played a clip from activist Tamika Mallory’s speech in which she condemned Cameron for not charging anyone in Breonna Taylor’s death.

“Daniel Cameron is no different than the sellout negroes that sold our people into slavery,” Mallory said on the clip Megan Thee Stallion played.

On Fox & Friends, Cameron shared his feelings about the performance:

Let me just say that I agree that we need to love and protect our Black women. There’s no question about that. But the fact that someone would get on national television and make disparaging comments about me because I’m simply trying to do my job is disgusting. What you saw on the screen and what your viewers saw something that I’ve had to experience because I’m a Black Republican, because I stand up for truth and justice as opposed to giving in to a mob mentality, and those are the sorts of things that will be hurled at me in this job.

He added that the Houston rapper’s performance displayed “intolerance and hypocrisy”:

The fact that a celebrity that I never met before wants to make those sorts of statements, they don’t hurt me but what it does is it exposed the type of intolerance and the hypocrisy because obviously, people preach about being intolerant. You hear a lot of that from the left about being tolerant. But what you saw there is inconsistent with tolerance. In fact, it’s her disposing intolerance because I’ve decided to stand up for truth and justice.

Watch his Fox News appearance below. 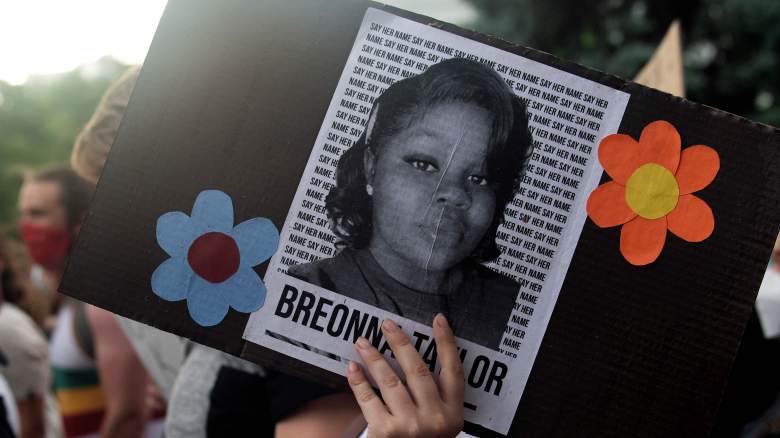 Getty A demonstrator holds a sign with the image of Breonna Taylor.

The lawyers for Taylor’s family have requested that Kentucky Governor Andy Beshear appoint a special prosecutor to reopen Taylor’s case after a grand jury and Cameron failed to charge anyone with her death, ABC reported.

“Unfortunately, Cameron did not serve as an unbiased prosecutor in this case and intentionally did not present charges to the grand jury that would have pursued justice for Ms. Taylor,” the open letter said.

When Louisville Metro Police Department officers entered Taylor’s apartment on a no-knock warrant, her boyfriend Kenneth Walker fired one shot because he claimed the police didn’t announce themselves and he thought someone was breaking into the home. Cameron said this one shot fired from Walker justified the 16 shots that Officer Myles Cosgrove fired as well as the six shots that Sergeant Jonathan Mattingly fired. The FBI found that the shots Cosgrove fired killed Taylor. Ex-officer Brett Hankison was indicted by the grand jury on three counts of first-degree wanton endangerment because some of the 32 shots he fired went into the apartment of the family next door to Taylor.

While on Fox & Friends, Cameron pointed out that he was the special prosecutor who handled the case initially and said the request for a special prosecutor is a part of the “Ben Crump model.” Ben Crump is the Taylor family’s attorney and a well-known American civil rights lawyer.

“He goes into a city, created a narrative, cherry-picks facts to prove that narrative, creates chaos in a community, misrepresents the facts and then he leaves with his money and asks the community to pick up the pieces,” Cameron said. “It is terribly irresponsible on his part to push such narratives, such falsehoods. As the attorney general, I don’t have the luxury of falsehoods – I have the responsibility to the truth, the law and justice.”