The Fortnite item shop has been filled with Fortnitemares cosmetics in the recent days with the introduction of new bundles and skins seemingly every day.

While that’s exciting to players who have a ton of money to throw at the game, it can be a bit discouraging for anybody who doesn’t have a disposable income. Luckily, Epic is aware of that and they’ve thrown players a bone with a free wrap.

Instead of just logging into the game and claiming it, there will be some additional steps you have to get to find a code. However, you can just skip all of that and enter the code to get your free wrap.

🐦This wrap code was found VIA multiple hidden codes in Creative Featured Islands, and can redeemed by anyone until October 27th & 10 AM Eastern Time.

According to Fortnite leaker FireMonkey, there were codes hidden on the Fortnitemares Creative islands, but you don’t have to worry about any of that because he revealed it for you.

Enter the code AU9NJ-BLVHV-TCLJS-54YTB into this website before October 27 at 10 a.m. ET and you’ll be able to get this wrap for free.

If done correctly, you’ll be told the code has been redeemed and the next time you log into Fortnite it’ll be added to your locker.

This isn’t the first time Epic has given something away for free, so it’s cool to see them keep up the trend well into Chapter 2 Season 4.

Any More Goodies On The Way? 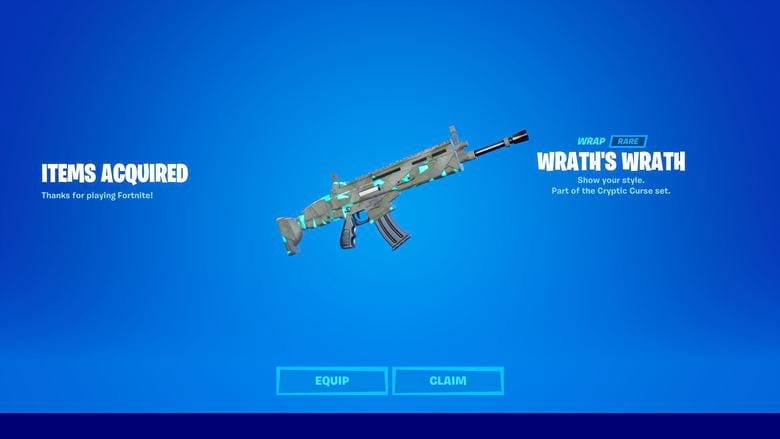 We don’t know if Epic plans on giving out more skins or wraps for the rest of Fortnitemares, but we can never say never.

At the very least, we can likely expect some more freebies for the Winterfest event, but we’re still months away from that even if some leaks have already come out about it.

If there are more free items given out this season, we’ll definitely let you know about them because who doesn’t like free things?

Fortnitemares ends on November 2 so make sure you finish up all of your challenges!