Getty BARRANQUILLA, COLOMBIA - JANUARY 28: Gianluca Lapadula of Peru fights for the ball with Davinson Sanchez of Colombia during a match between Colombia and Peru as part of FIFA World Cup Qatar 2022 Qualifiers at Roberto Melendez Metropolitan Stadium on January 28, 2022 in Barranquilla, Colombia. (Photo by Gabriel Aponte/Getty Images)

The Peruvian National Team left everything at the Estadio Metropolitano in Barranquilla en route to earning a paramount victory over Colombia in South American World Cup qualifiers.

Their 1-0 victory in Colombian soil was the first in 21 years and it was one that put them in prime position as they find themselves in fourth place with 20 points. South American qualifiers give four direct spots to the World Cup in Qatar this November with the fifth-place team going into an intercontinental playoff in the month of June.

A symbol of the suffering that La Bicolor suffered is none other than Gianluca Lapadula. The Benevento striker is characterized for always being a headache for the rival defense based on his mobility, although now he showed his combative nature against the defenders and offered a great deal of support in his own area.

Lapadula suffered the foul in the match when he collided with Radamel Falcao and the referee decided not to call a foul on the Colombian despite the profuse bleeding from the Italian-born striker.

This action caused him to bleed from his nose on more than one occasion. This forced him to remove the mask he was wearing as a protective device.

Peru would win thanks to a goal in the 85th minute courtesy of DC United attacker Edison Flores to propel the Peruvians to World Cup qualifying spots.

In the midst of all the euphoria, “Il Bambino” uploaded a selfie on his Instagram Stories showing what happened to his nose. 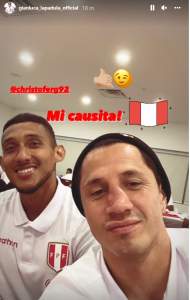 In his post, he was posing alongside teammate Christofer Gonzales and putting the phrase “Mi causita” (my friend, my boy) alongside the Peruvian flag while showing off his mangled nose.

This was not the first time that the Italian-born attacker suffered an injury of this nature. In the 2021, Lapadula suffered a fracture of his nose in the 3-3 draw against Paraguay in the quarterfinals of the Copa America. This happened during a corner kick when he ended up colliding with teammate Anderson Santamaria. Unfortunately for Peru, on this play Paraguay would score.

You can see the incident in the video below:

Lapadula would end up having to undergo surgery after the tournament and would begin using that mask to protect his face, although it would end up doing very little to prevent future aggravations.

In September, he would then take a knee to the face in the qualifying match against Venezuela. In this play, not only did his nose get hurt again, but he also would suffer damage to his teeth. In that play, Venezuelan Tomás Rincón would end up only getting booked and the referee did not go to VAR to check the play.

In their post-match report, Peruvian daily RPP discussed the injury and then used pictures from his Instagram account to show the before and after, and the damage that the player’s nose incurred in the past few months, drastically changing his physiognomy. 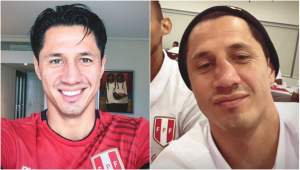 Lapadula InstagramLapadula before and after

Peru will now head back home to face Ecuador knowing that with a win would have them in a position where they could make a return trip to the World Cup.  Something that was deemed inconceivable after the fifth round when they only were able to earn one point out of a possible 15 and were in last place.

Meanwhile, Colombia’s World Cup hopes took a major hit as they dropped to sixth place and now will have to find a way to defeat an in-form Argentina side in Córdoba in the next round if they have any pretensions to go to Qatar.

Loading more stories
wpDiscuz
0
0
Would love your thoughts, please comment.x
()
x
| Reply
The Italian-born Peruvian forward once again took one for the team in Peru's win against Colombia as they took one huge step towards getting to the World Cup