The NFC East should return all four quarterbacks who finished the 2019 season as their team’s starter. However, the backup spot in each location has changed.

From Washington’s pursuit of a QB to push Dwayne Haskins to the Eagles’ bizarre draft, there has been a shakeup behind the starters on each team. Let’s examine the top-10 QBs in the division after an offseason of movement:

While the Cowboys missed the playoffs in 2019, they watched Prescott take another step forward, throwing for a career-high 4902 yards last season while tossing 30 touchdowns. He’s the top QB of the division, assuming he doesn’t somehow find his way onto another team before the 2020 NFL season.

Plenty of Philadelphians have gone back-and-forth on whether they believe the team should have kept Nick Foles instead of Wentz after the Eagles made history and won the Super Bowl. Foles hasn’t been great since leaving Philly and Wentz hasn’t been sensational.

The drafting of Jalen Hurts makes the situation even more interesting. Yet, Wentz has shown enough to best Hurts and most QBs in the division.

Let’s not get carried away with the Cowboys’ decision to sign Andy Dalton. Yes, he’s a good

Dallas has a history of making sure a suitable backup is on deck, though Dalton is arguably their best backup QB since the unknown Tony Romo was on the bench (I’m excluding Prescott, as he started his entire rookie season after taking over for Romo during the preseason).

Dalton was expected to play elsewhere, as Pro Football Action details. Ultimately, the chance to move to his home state was a driving factor in his decision to sign with Dallas.

Jones was considered a reach at No. 6 in the 2019 NFL Draft and he had his ups-and-downs during his rookie season. Pro Football Focus had Jones as the 24th best QB last year. Only 12 QBs threw more touchdowns than Jones, though turnovers were major pain points, including the 10 times he fumbled the ball, which is an absurd stat line. 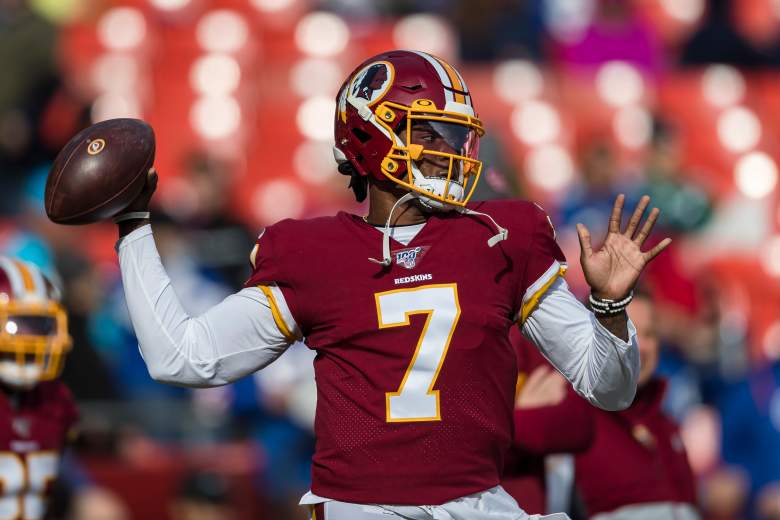 Haskins is in some ways, was the opposite of Jones. He doesn’t possess the high ceiling, though he doesn’t turn the ball over. The former Ohio State QB is more Alex Smith than Jameis Winston, as he protects the ball. Some of his turnovers were not his fault, as he had a few interceptions last seasons that hit the hands of his receivers before landing in the oppositions’.

I wanted to place Hurts as a high as four and I may look back on this post and regret not doing so. Hurts has the talent to be a franchise quarterback, though his path is blocked in Philadelphia with Carson Wentz in the fold. He’ll eventually get a starting gig, whether its in South Philly or elsewhere.

The team dealt away their fifth-round (the No. 2 overall pick of the round) in a trade to land Allen from the Panthers. Allen will be reunited with his former head coach Ron Rivera, who is entering his first season in Washington. Allen started 12 games for Carolina last season, tossing 17 touchdowns and 16 interceptions during his second season in the league.

Grouping these two together, as they will compete for the backup spot behind Daniel Jones. McCoy has shown he’s a backup level QB and can give teams a start or two if needed.

Rush, who is 26-years-old, was the backup in Dallas over the past three seasons and he’s now reunited with Jason Garrett, who was his coach in Big D. The Giants have five QBs on the roster, though it’s unlikely that Alex Tanney and Case Cookus make the final depth chart.

The Eagles brought back Sudfeld on a one-year deal and where he fits on the depth chart will be a subject of interest during the offseason. The 26-year-old has completed 20 of 25 passes for 156 yards during his three appearances with the Eagles.

More on the NFL: