What can you expect from a Tyra Bank’s Vine video? Tyra’s trademark crazy, in bite sized 6 second clips. Prepare yourself for Tyra on loop and try not to lose your mind in the process. The woman likes to sing… A LOT.

This is Tyra doing her impression of Rihanna. It’s a pretty accurate version of a terrible song, too.

This is Tyra doing her impression of a wet dog. The resemblance is uncanny! 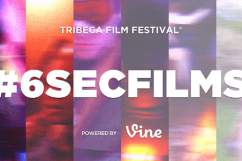 10 of the Best Vine Videos Ever Made, According to the TriBeCa Film Festival

Tyra tries her hand at some sexy French. Keyword tries…

Tyra puts on her Miss Cleo du-rag and predicts Jennifer Lawrence will win America’s Next Top Model because she fell on the stairs at the Oscars. Seems probable.

This is a video of Tyra singing loudly while showing off one of her photos. It’s just as amazing as it sounds.

Not sure what’s going on here, but it’s a psychologist’s wet dream.

Tyra forces her staffers to sing a duet with her.

This is Tyra’s first Vine video and a precursor of the hilarious insanity that was to follow. “Bitch get in vine!”