New York bartender has some pipes, covers Creep (Radiohead), and blows us awayWe were at a piano bar as it was closing down and the bartender stepped up to the mic and did this. He had been behind the bar working a full shift and shouting over the noise for several hours at least. The singer's name is Joe Ardizzone and he also asked to give credit to the his great pianist Nate Buccieri. And yes the vertical filming I did was amateur. Joe has setup a Facebook page where he'll post more videos: https://www.facebook.com/JoeArdizzoneOfficial Update: 21/10/2013 – I just found he has another YouTube video of him covering Jeff Buckley/Leonard Cohen: http://www.youtube.com/watch?v=DZQPTgfN4iw2013-10-19T16:46:04.000Z

Cody Littlewood was at a piano bar in New York City and as the night was winding down, a bartender, who had worked a full shift in the noisy bar, proceeded to give the above amazing rendition of Radiohead’s “Creep.” It’s an incredibly emotional and technically skilled execution of the classic tune.

One does kind of wish the woman yelling “yes” would stop doing that, however. 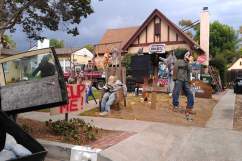 Read More
Reddit, Videos, Youtube
So much emotion and amazing singing — after a full shift in a noisy bar.