YouTube-user Cracker76 posted this recut of Disney’s Cinderella overlaid with audio from the original Carrie film. The result is actually a pretty feasible story line, with similarities drawn between the fairy tale and horror film that most people don’t think of.

Thought that was cool? Check out the other mashup using film footage of Disney’s Tangled and other Pixar films.

Carrie {fantrailer}I'm looking forward to seeing this movie, I've just watched the original one. Creepy! D: Sorry if sometimes the masking doesn't work very well, I tried my best and sometimes I was too tired and I had more things to check. Hope you like it! CAST Rapunzel: Carrie Gothel: Carrie's mother Audrey: Sue Snell Flynn:…2013-05-01T18:11:44.000Z 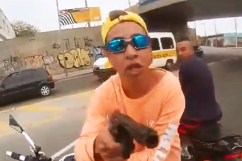