40 year old tantrum"To use this video in a commercial player, advertising or in broadcasts, please email Viral Spiral: contact@viralspiralgroup.com My 6 year old daughter had been in her room wigging out for about an hour, and there was no talking her down. I was getting fed up, so my husband decided to lighten the mood. For the record, she's not typically a beast child – she's actually a pretty awesome little kid who was having a rough day. :) To answer questions that have been asked over and over in the comments: 1. She was angry because she was tired and hungry and didn't like what I'd made for supper and thought she'd prefer McDonald's. 2. She was screaming "Listen to me!" because she took my refusal to take her up on the McDonald's idea as a failure to listen rather than a refusal to respond. 3. At no point in this video were we laughing at *her*. We were laughing at the antics of my husband. 4. The minute I turned my camera off, I went back into her room, (which I had been in and out of many times in the last hour – she was NOT left to scream by herself for an hour straight), showed her the video, explained we were laughing at Dad, and the tantrum stopped instantly due to the fact that she was laughing so hard. 5. This was filmed in early July. There hasn't been a tantrum of this magnitude in our house since. Thanks to http://TastefullyOffensive.com for posting this video!2013-10-11T18:49:46.000Z

Kathy Sterner posted this hilarious video of her husband lip-syncing to her daughter’s intense anger on YouTube on October 11th. Apparently, the daughter’s bad attitude was a fluke as she says in the YouTube description, “She’s not typically a beast child — she’s actually a pretty awesome little kid who was having a rough day.”

In any case, dad’s quick-thinking and mockery may be the funniest thing dad move around since Batdad’s latest compilation. The video was also featured on TastefullyOffensive.com. It has over 500,000 views at this time. 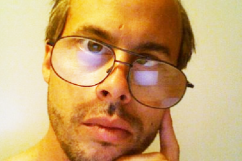 Read More
Funny Videos, Videos, Youtube
After his 6-year-old daughter threw a tantrum for over an hour, dad decided to lip-sync to the interminable screaming.