Felix Baumgartner’s space jump was widely publicized, where the dare devil jumped out of a space station 24-miles above Earth and free fell.
Apparently Baumgartner had a GoPro camera attached to his helmet as he fell, and here’s the proof: a Super Bowl commercial for GoPro.
Check out the commercial clip above, and the longer cut below.
Definitely spine-tingling.

GoPro: Red Bull Stratos – The Full StoryOctober 14, 2012, Felix Baumgartner ascended more than 24 miles above Earth's surface to the edge of space in a stratospheric balloon. Millions across the globe watched as he opened the door of the capsule, stepped off the platform, and broke the speed of sound while free falling safely back to Earth. Felix set three…2014-01-31T12:00:03.000Z 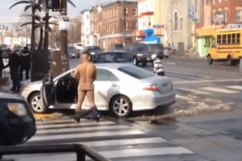