This Instagram video has been making the rounds on Facebook, allegedly showing a man opening a beer bottle by using a refrigerator magnet and a quarter.
Cool, right? Well, only if it works…

Unfortunately, the consensus is that the trick doesn’t work and it’s a troll video. YouTube users who tried the trick reported:

I just tried it and it didn’t work… but that’s probably a good thing because it’s 8 in the morning and I would had to have drank it, which would make me an alcoholic. ﻿

SFX for the water vapor coming out of the bottle when it is opened, so it doesn’t even look real, because it looks like a puff of smoke… Also it looks like the cap was pulled to the side with some thin string, rather than popped off. Such fake.﻿

However, one contrary fellow who claimed he was a physics major reported:

physics major here, it works…you guys might want to try a stronger magnet, u also have to hit it fast enough, watch his technique one more time﻿ 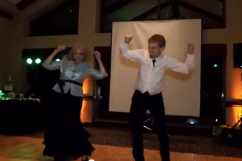 Read More
Science, Trolls, Youtube
A new party trick may have been discovered.