But some people are crying foul, saying that the “selfie” isn’t really a selfie at all. The photo wasn’t taken with a smartphone at all, and both of Kristensen’s hands are viewable within the frame — meaning it technically isn’t a true selfie.

The photo was snapped by a mounted GoPro.

But we think that sounds like a much safer option for a fighter pilot. Distracted driving with cars is already enough of a problem. We don’t need distracted fighter pilots.

Fun fact: A single AIM-9 missile costs $664,933. So this picture is worth over half-a-million dollars. 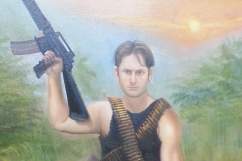 PHOTO: The Most Epic Painting You Have to See to Believe