MarijuanaDoctors.com has revealed the first ever television commercial to play on major networks.

It begins with a man in an alley trying to sell sushi. And only gets better. 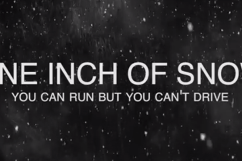